Let’s start with the worst.

Only slightly less cringey, a remake of an old country song:

This one comes with machine-gun sound effects.

Here’s a little something to get those out of your head:

In less nauseating musical news, it was Wendy Carlos’ birthday last week. So here’s a clip. The bit starting around 3:52 is the most casual display of genius I’ve ever hard.

It’s good to see Carlos alive and rejoicing at the prospect of computer technology bringing broader ranges of music and opportunities for creativity to the masses (and I imagine you’re happy about a virtual substitute for catgut.)

You might be interested in this resource devoted to the works of another founding mother of electronic music: https://wikidelia.net/

(Derbyshire is most famous, of course, as co-creator of one of the most iconic of experimental compositions, accomplished through tapes and feedback:

Oh my gawd; I simply love Delia; so thank you for that link. Ziwzih Ziwzih OO-OO-OO!!!

The funny thing about catgut is it’s not from cats. It was a by-product obtained from butchers. Possibly it was originally ‘cattlegut’. But the early manufacturers of violin strings wanted to maintain a monopoly. So they encouraged the myth, as there was a real taboo on harming cats at the time. This was in the days that the fine for killing a cat was enough grain to cover the poor moggie’s body. Reflecting their role in protecting food staples from meeces. 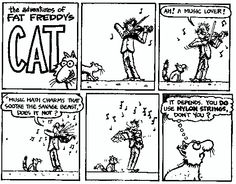 I couldn’t think worse of them.

A long time ago I made a stupid joke that wouldn’t make any sense to anyone who wasn’t in the room during the raucous, tipsy conversation that led up to it. It involved the conflation of Wendy O. Williams, the iconic front of the punk/metal Plasmatics who would often moon her audiences or go topless on stage during concerts, Wendy Carlos (seen above in Alan’s comment) a pianist, keyboardist, and pioneer of the development of what would become the electronic synthesizer, and William Carlos Williams, a modernist poet who celebrated the small and quotidian details of life in New Jersey.

The joke, as inscrutable as it may be now, nonetheless went over so well that to people who were there at the time (no, not just me) are all reminded of the other two whenever one of them is mentioned. “Wendy Carlos Williams” has now become shorthand for this artistic trinity.

All this is to say: Alan, I enjoyed rewatching that interview clip and glad you posted it here as an excuse to speak of three very different people who each had an effect on me growing up.

I love such precise and erudite musical terms as “twiddly bits” and “wobbulator.”

The funny thing about catgut is it’s not from cats. It was a by-product obtained from butchers. Possibly it was originally ‘cattlegut’.

Thing is, I’ve also heard catgut specifically mentioned as a material for musical instrument strings in an old Japanese folktale/proverb, in which wordplay on “cat”/“cattle” wouldn’t happen, and in which the feline source is necessary to the sequence of events.

The proverb is, “When the winds blow, the coopers prosper”, and it’s a statement of the ecological interconnectedness of everything. Here’s the reasoning:

There is, or was, a widespread eye disease (trachoma, I think) transmitted by windborne germs; even before people knew about microbes, they’d have noticed that this disease surged under windy conditions.

This led to a sudden jump in the number of blind people. One of the few occupations open to blind people was that of wandering musician, and the stringed instruments they played were made with catgut; an increase in the minstrel population therefore created a decline in the cat population.

With the cats away, the mice and rats, undeterred, would gnaw through storage barrels to get at the contents—thus requiring replacement, meaning demand for the coopers’ services.

(Important disclaimer: I’m going to have to check now to determine whether this story is in fact of genuine Japanese origin or a steaming pile of fauxrientalism.)

ETA: And right off, here’s an entirely different and far less convoluted explanation; the phrase occurred in a manga, which does suggest Japanese provenance: http://www.baka-tsuki.org/project/index.php?title=Talk:Zero_no_Tsukaima:Volume3_Chapter8

Hi all, quick query. can anyone think of someone who lived in a yert who isn’t Ghengis Khan?

Moog synthesizers, Klaus Nomi, the theme from Dr Who, AND Wendy O Williams and The Plasmatics, all in one post! Almost makes me forget about Mr. Rittenhouse. Almost.

An elderly couple who were friends of my parents, had a Moog. This was in the late 1970s. They also had a great deal of patience for children playing with their Moog.

I used to have a cassette tape – remember those? – of all the great sci fi theme theme music, Dr Who included. I don’t know what happened to it.

@Alan Robertshaw:. I thought it was spelled ‘yurt’. Nope.

This article brings up the names of other historic yurt-dwellers, although Kublai Khan is the only other one likely to be within your average Westerner’s Small Reference Pool:

Thank you for that. I have a soft spot for a lot of Japanese cultural things; so that’s especially interesting.

And also thanks to you and @ dormousing_it for the Yurt suggestions. I couldn’t think of anyone other than Mr G (well, we are related, apparently). I would have thought of Kublai, but some bloke from Porlock interrupted me.

I would have thought of Kublai, but some bloke from Porlock interrupted me.

It amuses me to postulate a character called Captain Porlock, a space pirate whose mythic function is to sail the ethereal seas of Dreamland interrupting people’s dreams right at the good part. (Speaking of—or at least alluding to—anime…)

Rittenhouse went on Fox News and claimed that he actually supports BLM and now some of his white supremacist supporters are having meltdowns.

Meanwhile, Kyle Rittenhouse has inspired some fuckhead to drive an SUV through a crowd of Hispanic-Americans a mere hop, skip, and a jump from Kenosha:

And guess what? The perp had a history of domestic violence. In fact had just gotten out on bail after an arrest for it.

Perhaps most interesting, it seems he is a black nationalist … white supremacists need to be thinking about “unintended consequences” here. You didn’t just embolden your own followers to more vigilante violence, fascists. You’ve also provoked your foes, both non-white racial supremacists and the left, and while the latter will “just” be better prepared and better armed to defend themselves next time, knowing they can’t rely on the police or the courts for protection, the former are just as capable of proactive violence as you are.

This is just to say

Forgive me
They were musical
So twiddly and so Moog

(The better to compress yet somebody else into the convoluted in-joke.)

For me, the first thing that comes to mind when Wendy Carlos is mentioned is Tron, for which she composed the original soundtrack back in the 1980s.

@Cryp Dyke:
Believe me, I know how that goes. It’s interesting the way that memories get tagged with the emotions you were feeling at the time, and certain in-jokes will always seem funny because you found them funny at the time, even if there’s absolutely no way to lead anybody else to the same mental state anymore.

(Discovered that doing silly things while punch-drunk tired at 3am… the weirdest things would set people off, and the next day when we were all well rested, just a single word from that night could set us all off in gales of laughter again.)

Sort of related. In anticipation of a new play about Jaws (the film) I watched some interviews with Carl Gottlieb, the screenwriter. He was on about the “You’re gonna need a bigger boat.” line. For years he’d thought it was an adlib by Roy Scheider. But then at a con Roy said it was in the script. So Carl was trying to remember how it got there.

So the story is, the film crew had a boat. They said it was too small for the task, and they constantly asked the producers for a bigger boat. But whenever there was a problem with the shoot, the crew blamed the boat. So it became a running gag on the shoot. Whenever anything went wrong, regardless of the reason, people would just say “You need a bigger boat”

And Carl thinks he must have just slipped that into the screenplay one night.

Oh, and the crew eventually got their bigger boat.

It’s funny, but all the discussion in the media about the Rittenhouse case is literally Critical Race Theory. In the actual technical sense; not the Fox News one.

There’s been loads of discussion about the technical aspects of the law of self defence; but people have also discussed whether the verdict would have been different if Rittenhouse had been black.

And asking questions like that is all Critical Race Theory is.

Even Fox News commentators arguing that, because the victims were white then race didn’t play a part in the case, is CRT in action. Oh the irony.

Judging by their surnames, the victims were Jews. And they were there to defend Black lives. So race absolutely played a role, if perhaps a more tangential one than if Rittenhouse had been Black.

Of course, if he had been, there would have been no verdict. He’d have been shot dead by one of the cops who, in this timeline, gave him water; and that cop would not likely have been charged with anything. Given the key to the city for stopping the rampage of an active shooter, perhaps.

Now Rittenhouse has pissed off the Qanon folks.