So this was a bit of a surprise: over on the incel hangout known as the Black Pill Club, the regulars are celebrating, not lamenting, the shuttering of the MGTOW subreddits.

But I suppose I shouldn’t be surprised. Although they claim to be radically different from one another, incels and MGTOWs share many similarities, most notably the same misogynistic ideology that’s everywhere in the “red pill” world.

Yet the incels pine for love or at least sex, and are angry at being rejected by the women they both idealize and hate, while the MGTOWs like to pretend they’re the ones doing the rejecting. Both groups claim to be the most radical in their thinking about women: Incels take a certain pride in their extreme “blck pill” pessimism about women and the world in general, while MGTOWs think the incels are still “blue pilled” in that they still desire women and haven’t given up on them entirely.

So it really shouldn’t be too surprising to see the incels feeling cheery about Reddit’s MGTOW ban.

In a recent thread on the Black Pill Club, a commenter called Blackguard reported happily that “r/MGTOW and r/MGTOW 2 have finally been BANNED.”

“This is LIFEFUEL,” he proclaimed.

Talking about Mgtow on Reddit in “quaranteen” was cucked and very lame.

But fortunately now they’re banned, and will have no choice to “go there own way”.

These Mgtow-er’s will be FORCED to be part of the blackpill-sphere and its awesome.

This is pretty much the final nail in the coffin for the outdated “redpill”.

Instead of just inkwells, IT’S OVER now applies in one way or another to the redpillers as well.

No more outdated redpill stuff about “the wall”, “cat ladies” or other hilarious coping.

The neo-masculinity was cringe and needed to die.

Even the PUA’s will be forced to go blackpill in some way. …

Someone needed to force them “to go they’re own way”.

The redpill at this point is just outdated. The blackpill is really the only one left.

Most of the commenters in the thread agreed with Blackguard.

It’s funny because by doing this; the entire manosphere will just funnel into the blackpill which mean more radicalized sub 8 men jfl

They had it coming for pretending that there can be a third, compromise position between upholding god-given rights of free speech and access to means of reproduction (private property) and totalitarian cucked feminazist hellscape.

Ismail Ax somehow managed to work a threat of mass murder into his reply:

Funnily enough, it happened on the 12th anniversary of George Sodini’s postal spree.

Won’t be surprised if we see a r/MGTOW killer in the works, but attacking Reddit HQ which would be lifefuel.

But not everyone was happy with the MGTOW subreddit shutdown. Diacylglycerol82 lamented what he called

very sad news. I like the mgtow community despite some of their delusions and if i could get laid would likely consider myself as one rather than as an incel.

Despite being mostly rejected trads, they are the community which has been willing to examine gynocentrism and male disposability and there have been some great content creators out of the mgtow space

Most incels seem to want to get married and have kids, so it was nice to have a community that offered men an opportunity to avoid such things.

There are already many options out there for single guys. You don’t need to be a raging misogynyst to truly “go your own way” and live an independent lifestyle.

But if you choose either the ncel or the MGTOW life,

I’m having trouble moving past this claim:

Great to see you here again. How’s life in academia these days? You back to ‘normal’ yet; or is it still all remote stuff?

Alan, helllooooo!!! How nice to “see” you.
Honestly it’s all over the place here & it’s only going to get halfway normal when we have enough folks vaccinated (the vax rollout is an absolute shambles).
Both unis I work at have gone back to face to face teaching, but then we’ve been hit with one lockdown after another, so we keep going back and forth. Great for students’ stability and mental health 🙁
How is everyone here?

File this one under “Headlines I never expected to see”.

Of course Incels are celebrating. They’re miserable shits who wallow is the suffering of others. You can’t call it schadenfreude as there is no shame in their joy.

Blackpill incel: I’d like humanity to go near exist so women would be forced to sleep with me. Then I can be properly appreciated for keeping her away from men like me.

“This is LIFEFUEL,” he proclaimed.

@Mish
So nice to hear from you again. I hope all is well with you and your family. My boyfriend, my cat, and I are muddling along in this Covid era.

I’m having trouble moving past this claim:

I understand that we now live in a post-truth world.

Why weird? They detest each other.

Mishhhhh <3 So nice to see you

At least they’re honest about just flat out saying that they think women should be private property. Makes them much easier to identify and avoid when they just say it straight.

By way of brain bleach…

A railway station I use a fair bit has a cat; called Hector. Normally he lives in a little house on the platform. But yesterday he was working in the office. I’ve only just noticed he has his own locker.

Ooh wow; that cat train is so cute! What a memorial. Thank you for that link; that’s such a lovely story.

Next time I’m down the station I’ll suggest they should stick whiskers on the Paddington train.

This is Hector’s House btw. (Ignore the unattended baggage; that’s just my rucksack)

Hector is the best! I love it when shops and services have mascots. His locker probably has cat treats in it.

As for today’s content: it’s ironic that the grand internet midden of misogyny is full of infighting where MGTOW is pitted against Incel; all of boils down to the same misogyny, bitterness, and anger at unfulfilled life. I guess fighting each other gives them something to focus on, since most women won’t give them the time of day?

Mostly, I come here for the pithy and amusing writing (from David Futrelle). It feels like a healthier way to learn what’s going on in the androplex of hatred than reading the source material.

From Blackguard in the OP:

“go there own way”

Last edited 1 month ago by Gaebolga

Station Master Tama is my new favorite bit of trivia in the whole world.

I love that cat so much!

Aaaaahhh it’s so good to hear from you! I hope you’re all doing ok, or as ok as can be managed. God these are difficult times.
I haven’t shared a pic on here in forever, so hopefully this works (if not, here’s my Twitter post where you can see my Mei-Mei cat being a plant 🙂

@Mish, @Alan Robertshaw
Mei-Mei and Hector, who are adorable in the extreme, have made my day.

My boyfriend and I stop in to see a certain San Francisco shop cat on the regular. She looks a lot like our gray girl cat, who now dwells with the cat goddess Bast in the afterlife. Both our cat and the store cat have sad backstories, but I’m happy to report that their luck changed for the much, much better. Sometimes we take grass and catnip to the shop cat, who accepts our gifts graciously. When she’s not available to see visitors, we assume she’s in the back, going over the books.

Your Mei-Mei crop is coming on well this year! 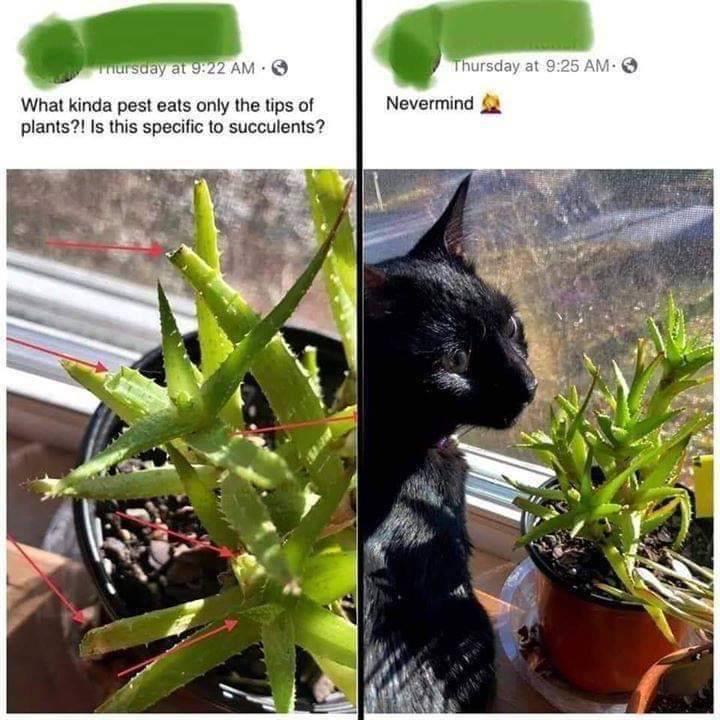 I was sad when Tama died, but happy when she became a demigoddess. And her successors have been properly trained. (No pun intended)

I would leave treats at her memorial, and also at Hector’s house. And lovely Mei-Mei’s plant.

I love that it’s the way of the internet that so many discussions turn into cat picture sharing.

I knew the name Ismail Ax was familiar. https://en.wikipedia.org/wiki/Seung-Hui_Cho#Media_package_sent_to_NBC_News