People throwing fits over nothing? Never gets old.

Today I took a little peek into the Gender Critical forum on the Reddit clone called Saidit, one of several forums that Reddit’s TERFs flocked to after their subreddit was taken down. I found one very irate commenter wondering why there are so very many trans men having babies.

Of course she didn’t word it like that. The headline for her post was “What’s up with there being so many pregnant TIFs?” TIF, you see, is the transphobes’ way of saying trans man; it stands for “Trans-Identified-Female.” Which is pretty much the dumbest acronym in TERFdom except perhaps for TIM, or “Trans-Identified-Male,” their term for trans woman.

Ironically, it turns out that the angry commenter has a little bit of trouble with acronyms herself.

“I am currently pregnant for the first time,” she writes,

and I don’t go to many pregnancy subs, but when I do (r/babybumps for example) there are a ton of posts by pregnant FTMs! Sometimes they even mention it when it’s completely irrelevant.

That’s because you’re on a pregnancy subreddit, where FTM doesn’t stand for “Female to Male,” an archaic way of saying trans man.

It stands for “First Time Mother.”

But our angry commenter doesn’t know that, and continues her rant:

It’s completely insane to me. Here you are, a woman, literally pregnant. You are doing something only a woman can do, with the assistance of something that only a man can do. There’s literally no other way to make a baby. Even test tube babies are made with a female part and male and carried by only a female. And yet you want to scream to the world you’re a man? I mean that’s just nuts. I don’t have any other words for that.

Well, you don’t really need to have any words for it because it’s a figment of your delusional mind.

But my question is, how did this happen? Why are there so many? What is even going on? I guess these are the assholes pushing the “chest feeding” trend but how did we get here. Does anyone have any insight on these insane people? Also let’s not forget how fucked up they will raise the poor child. We are going to have a chunk of a generation raised by TIMs and TIFs.

Sure, a chunk, but a fairly small chunk, I would guess, with a much larger number raised by FTMs of the “First Time Mom” variety.

This is what happens when you (and by “you” I mean TERFs) refuse to use the same language that everyone else is using in favor of acronyms like TIM and TIF because you just really, really want to misgender some people.

Well, off I go to feed the CATS (Carbon-based Animal TerroristS).

Did anyone break the news to her and set her right?

Pity she took the correction somewhat gracefully though.

hmmm. So when I gave birth to my daughter in 2013, if I had known at the time I was a trans guy, that would have made me a FTMFTM? FTM²?

How shocking, as people with this particular belief are well known for the copious research they do /s

I guess these are the assholes pushing the “chest feeding” trend but how did we get here.

I haven’t heard “chest feeding,” but I see no reason why “breastfeeding” has to be gendered anyway. The word “breast” can be used for any gender, imo.

Last edited 4 months ago by epitome of incomrepehensibility

Sure, a chunk, but a fairly small chunk, I would guess, with a much larger number raised by FTMs of the “First Time Mom” variety.

Urban Dictionary: the Junior Woodchucks’ Guide to not being a bloody ignoramus on the Internet—particularly if you’re older, white, and from an insular cultural background. Acronym searches narrowed by context don’t hurt either.

hmmm. So when I gave birth to my daughter in 2013, if I had known at the time I was a trans guy, that would have made me a FTMFTM? FTM²?

Then you might appreciate this particular Tolkien/Scottish Play Prophecy Loophole: http://naamahdarling.tumblr.com/post/653649662145921024

Last edited 4 months ago by phantop

@Seth: It’s (FTM)² since you were 2 of each letter, not just the M. You could put a ² after each letter, but that’s really long.

Because some of us learn what the symbols mean before we use them, unlike this TERF.

Also, you could go around saying “ftoom ftoom”, which might be fun for your kid.

Ah, of course, silly me. Forgot the parentheses. Thank you.

Nice. I’ve actually thought about that as being a loophole for something of the sort. Not sure my kiddo is going to be slaying any evil/traitorous kings, but I guess I never know.

@Seth – has a prophecy been revealed? Is there a mysterious parchment anywhere? They can be a good guide for the whole ‘destined to kill the ruler’ thing.

Now I imagine a child prophecied to kill a ruler, and the twist being that it’s just the wooden stick used to measure stuff at school.

Seth: hehe pretty much the same for me.

I only knew about First Time Mother because it shows up in discussions about ambiguous acronyms like CBT and MSM, which my twitter friends get into semi regularly.

OT: After about 18 months of being decently reliable, the local hydro company has completely dropped the ball. 20 minute outage yesterday and then today out for over 2 hours, both during calm weather — no nearby lightning, no wind stronger than a stiff breeze.

Is there anything I can do to make them go back to the quality of service they’d been providing for the past 18 months? Because there is no freaking way I can live with the power going out for an hour or two every fucking day. If this trend continues I will have no choice but to move … and no clue how I’ll be able to afford the costs, or even where I’ll be able to go that will not have unaffordable rent. But I certainly won’t be able to stay here.

Is there anything I can do to make them go back to the quality of service they’d been providing for the past 18 months?

Unless you’ve got a spare few billion laying around to buy Ontario Hydro, or a smaller but still significant amount to bribe Seamus O’Regan to actually pay attention to his department for 5 minutes – no.

How….how did this pregnant woman not know it stands for first time mom.

Big Emily Litella energy with this one.

“Well, off I go to feed the CATS (Carbon-based Animal TerroristS).”

THEY JUST DID IT AGAIN.

THREE TENS-OF-MINUTES OUTAGES IN AS MANY DAYS.

TELL ME HOW TO GET BACK TO THE WAY THINGS WERE 4 DAYS AGO.

Regarding ambiguous acronyms, Fred Clark had a roundup posting recently which included a comment thta Christian Book Distributors were changing their name and logo because web searches for ‘CBD’ tended to show other things first these days…
Your jokes won’t land in the same space you’re used to
The actual name change was in 2019, but it’s still amusing.

@Jenora: I know which one I’d rather settle into my couch with after a hard day.

@Elaine: you’ve reminded me of the true horror — this woman is about to reproduce and raise a helpless little human.

@Seth: hey, it’s good to have a kid who can either bring on or defeat a prophecy. Cherish her loophole!

The FTM thing would have thrown me too, because I grew up with that, but it’s since fallen into disuse. LMAO at this dumb TERF. (Literally Mocking All Over.)

In addition to Overlords and Presidents, I, too, welcome feline terrorists, because they’re so darn cute and usually their demands are for more tuna or something. Reasonable and easy to fulfill.

Reasonable and easy to fulfill.

Oh I dunno. Have you seen how many giant cat statues there are around the world?

I like this one. It’s in Catford, London. Locals like to tell tourists the town is named after the cat, (It isn’t) 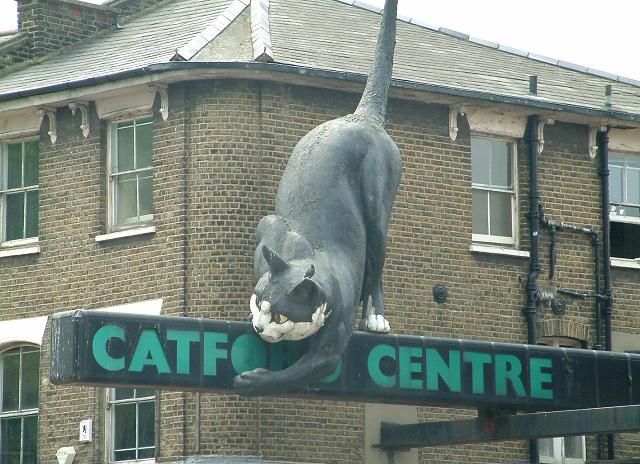 @Alan : everyone know that cats are named such because they appeared first in Catford.

They then moved on to build the egyptian pyramids. There’s a reason ancient egyptians were so fond of cats after all.

If you were Graham Hancock you could probably get a book deal and a TV series out of that idea.

I think they should mechanise the statue so it randomly knocks things off the plinth. 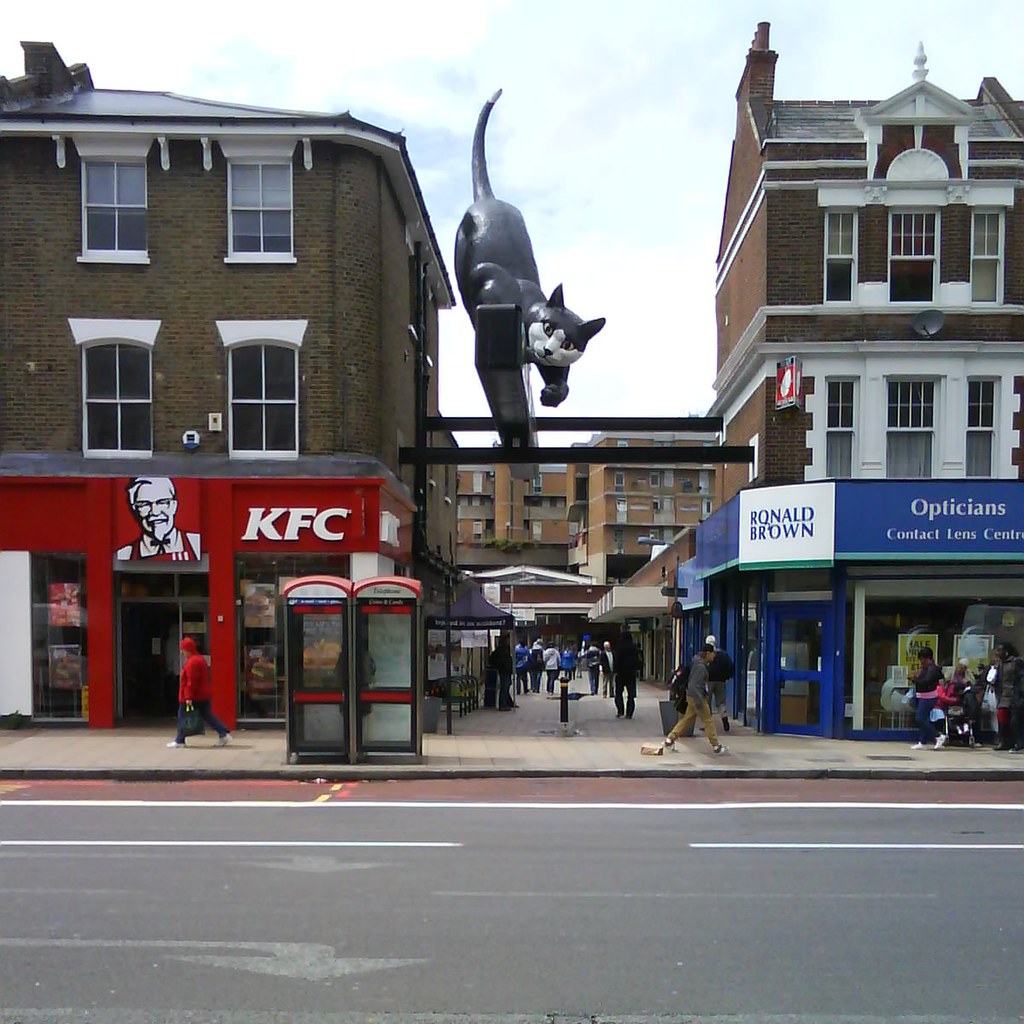 I’m normally a cat person, but even I can agree that Digby is a very good boy.

That is a good boy though.

@Alan: I think giant kitty is just waiting for the middle of the night to swoop down on that KFC.

Surely there must be a giant fish statue for the kitties, right? (I have never seen anything like those before, how cool.)

I’m a cat person too, but Digby is a very good doggo.

I haven’t heard “chest feeding,” but I see no reason why “breastfeeding” has to be gendered anyway. The word “breast” can be used for any gender, imo.

There was one article by a trans dad wording it as “chest feeding.” Looks like that was enough to freak out the TWERFs.

Anyway: “breast” is kind of gendered. “Nursing,” however, seems less so.

LOL, I also have 2 Carbon Based Animal TerroristS!