Are Maocels now a thing?

The Twitterer who calls himself @mass__line is a South Asian Maoist living in Canada. He’s also, he says, a lifelong celibate, but by no means does he consider himself an involuntary one; he’s proud of this virginity. Indeed, he considers his continued celibacy to be part of his duties as a revolutionary.

In other words, he’s taken those lines in the Beatles’ “Revolution” — “But if you go carrying pictures of Chairman Mao/ You ain’t going to make it with anyone anyhow” — and turned them into a lifestyle choice.

@mass_line’s recent Twitter feed is filled with fervid denunciations of sex, which he considers a counterrevolutionary act; his Tweets read like a weird mixture of Chairman Mao, Andrea Dworkin, and Reverend Moore from Footloose. “We must view sex as an act that the enemy commits,” he explains in one tweet. “We are a People’s Army not a house of coitus,” he declares in another.

Well, that’s one revolution in which, to paraphrase Emma Goldman, there will be no dancing.

So is this a genuinely Maoist thing? I’m obviously not a scholar of Mao Zedong Thought, but my understanding is that life in the Red Guards was indeed pretty sexually repressed.

It’s also my understanding that Mao himself fucked constantly with an assortment of partners, at least according to his former personal physician.

I somehow suspect that @mass_line would dismiss such reports as fascist propaganda. It takes a lot of self-gaslighting to remain a Maoist in this day and age.

Ah well, at least @mass_line is something of a break from the regular old incels and their whining.

O/T, but Jair Bolsonaro, President of Brazil, has COVID-19.

I have a friend who’s desi, and when I asked him about the “red salute” thing, he checked with his mom, and she said she thought it’s used as a greeting among communists in India.

As for scientific intercourse … did anybody else see the (not picked up) pilot movie Island City? It starred Kevin Conroy (yes, the voice of Batman), and was a sort of post-apocalyptic drama. In the world of Island City, a youth drug that works (sorta!) comes on the market and most of the Earth’s population uses them. Unfortunately, a lot of the drug-takers turn into something very like an old-school ideal of a Neanderthal – very feral and brutal, very dangerous … think “zombie” but without the brain fixation. The rest of humanity is gathering in a shielded community known as Island City. Since Island City wants to repopulate the Earth eventually, they have passed laws about who you can mate with, signified by an implant in your chest that is either red, green, or blue (and other colors I forget). If you try to have sex with someone out of your “color group,” you’re in violation of the law, because any cross-color babies are assumed to turn into the civilization brutes seen outside Island City.

I think it could benefit from a reboot, BSG-style, where the concepts are a little more ironed out and tweaked for a 21st century audience. There’s room for some interesting drama related to state-governed reproduction policies.

O/T, but Jair Bolsonaro, President of Brazil, has COVID-19.

So the starting premise is sort of like the punchline to Aldous Huxley’s After Many a Summer Dies the Swan, where it turns out that since humans are apes that physically retain juvenile qualities, a side effect of extending life to several centuries is that the individual has time to grow into an apelike “adult” form?

Or is this a side-effect the drug has on people with one particular gene, since the plot appears to be about trying to breed that trait out of the pool?

Viscaria: randomized-control sex seems like a kink that some scientists I know could certainly get into.

@numerobis
As always, there is one or more XKCDs for that. 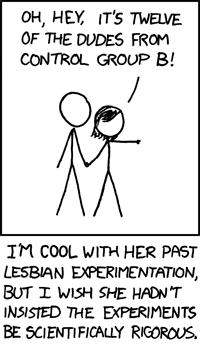 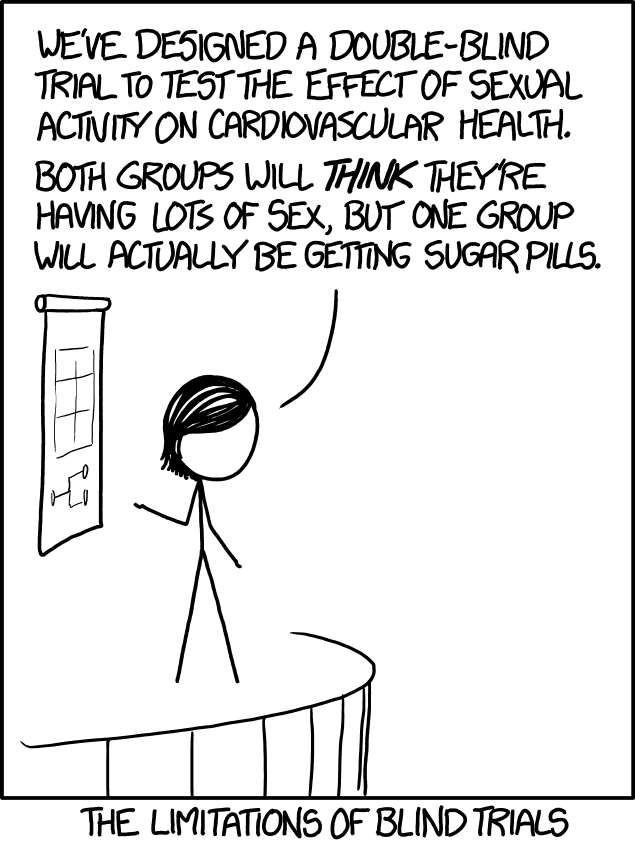 I don’t know what equivalent expression might be proposed, or is currently in use, for the concept of masking key information from participants and/or researchers and/or third parties in conducting medical studies.

In Finnish, the word conventionally used in this context means blind as in “blindfolded”, not as in “lacking eyesight”.

Viscaria: randomized-control sex seems like a kink that some scientists I know could certainly get into.

… And you had me at the mention of blindfolds.

You should do that. It would appeal to a very specific audience, but niche audiences often are good groups to write for.

In English, “blind” as an adjective generally means “lacking sight” (though sometimes only metaphorically, for example, you can’t see where a “blind alley” goes to from the outside), while “blind” as a noun refers to something which blocks out light (such as blinder, blindfold, widow blinds). It’s two different, vaguely-related meanings packed into one word. And then there’s the phrase “the blind”, which uses the adjective version in a noun phrase. Also, I don’t know whether that phrase is still kosher. I hadn’t ever thought about how all that might cause issues for blind people.

You’re already putting more thought into this than the showrunners did, I suspect.

In french, the word for blind experiment is the same as the disability.

Except the same word is also used for when specific circumstance make one unable to see. Like not being attentive enough, or having been temporarily blinded by a sun ray.

I don’t believe the term here to be ableist, but I am open for a longer explanation and/or it might be linked to language quirk or cultural problem. It’s not because a term describe a condition that it should be used only for that condition.

A car ran into protesters that were peacefully dispersing from a BLM rally in Bloomington IN. At least two people were hit, with one evidently traveling on the hood of the car for two blocks before falling off.

Or rather, the protest was over an attempted lynching at nearby Lake Monroe over the July 4th weekend.

For those whom that city name rings a bell, Bloomington is the home of Indiana University. Which, as I recall it from my time attending there in the 1990’s, was fairly progressive place. Also quite pretty, with some nice limestone classroom buildings.

Maoism is a cult of personality where the leader’s directives are considered correct because the leader spoke them. The world has a LOT of those right now….

extending life to several centuries is that the individual has time to grow into an apelike “adult” form?

Personal experience would suggest it doesn’t necessarily have to take centuries.

Reason #173 why not to read while tired: I spent the entire article waiting to find out why the chap was wet.

Look, I’ve apologised for the tranq dart once already.

In fairness the ear tag is going down quite well in Camden.

The worst thing is walking through the woods and everyone from Fortean Times trying to film me.

What makes that ableist?

Sorry for taking so long to respond!

I am not blind, so I can’t speak for that community. My understanding from different contexts is that a lot of blind people find it inappropriate and inaccurate to associate blindness with ignorance, which we do in a lot of English idioms–blind spot, flying blind, etc.

I’ve never thought about it in terms of double-blind before, and in fact I didn’t think of it when I wrote my original joking comment. On rereading what I wrote, I thought, well, crap, here we are using blindness as an analogy for ignorance again, so I added the edit. I should have used less forceful language, since what I said was very certain and authoritative, and I’m not an authority at all. My interest is in supporting the blind community, and so the opinions of actual blind people are the ones that matter here.

And then there’s “blind as a bat,” which is deeply unfair to bats, seeing as they’re not blind.

“Blinded” is used here in the metaphorical sense of not being able to access certain types of information.

With that in mind, here are a few suggestions in no particular order:

> Ariblester
Thank you for the information (about the Indian Communism, i mean).

Ariblester: mutually anonymous as suggested above by Kimstu strikes me as more accurate than either the common idiom, or your suggestions. It explains what double-blind actually means.

“We support womens liberation! but also under communism we will outlaw sex and “promiscuity”” I have a feeling mister womens lib here things all women should be chaste maidens or something… reactionary communists are the weirdest

This is an obvious false-flag troll intended to make socialists look stupid, why are you making such a big deal about it?

the only stupid troll I see here is you

@incel
No wonder incels think they’re so oppressed if 50+ comments in a thread counts as “making a big deal”. What are proportions or such anyway.

Also kind of weird to try to make socialists look stupid by purporting to be Maoist, but okay.

@Masse_mysteria
Well, I’m guessing our incel visitor probably doesn’t know the difference between Maoists and socialists. Most right wingers just lump everyone to the left of themselves together and label them all as “communists”, “socialists”, or misuse some other term.

This isn’t new. There is a tradition in left-wing circles to abandon sex until the revolution. You can imagine how this does wonders for recruitment.

“There’s three things to know about Maoism:
1) “Marx Has Said”
2) “Mao Has Said”
3) “Questioning Correct Verdicts”
Maoism is a cult of personality where the leader’s directives are considered correct because the leader spoke them. The world has a LOT of those right now….”

Wait what? I don’t think you understand anything about maoism at all. Maoists reject cult of personality and dogmatism. These directives aren’t viewed correct because the leader spoke them but because they agree with them, if they would just uphold anything any leader said then they would probably support pol pot as well since he considered himself a maoist too, even though he supported deng xiaoping and had several fascists in his government as a hilariously bad understanding of the principle of new democracy. Mass line and all these anti-sex maoist twitter accounts are mostly joking as its some sort of meme in the maoist community, I say mostly because I’m not sure about “mass line”, but these statements are so ridiculous that it should be obvious that they aren’t serious or don’t construct an actual threat as no one would follow these ideas, as with people who unironically uphold pol pot.

Also, if maoists uphold a cult of personality, then why would they reject sex? Mao had 10 children, so he had sex at least 10 times. It’s really bizzare to think that these people aren’t joking.