Our old friend Roosh V is sounding a bit like a fundamentalist preacher these days:

Yes, this is the very same Roosh V who made his reputation, such as it is, and a good chunk of his living, off the sale of books teaching men how to “bang” women in assorted countries, even if they literally tell you “no” thirty times.

Has Roosh really found religion? Somehow I doubt it. I think he likes the idea of religion — or at least the kind of religion that treats sexually active women as scarlet harlots — a lot more than he likes actual religion.

But he’s not the only alt-lite grifter who’s become a little obsessed with the Wicked One and his demonic minions.

After being approached by a young man trying to troll him at Politicon in 2017, weirdo conspiracy monger (and Gorilla Mind pill pusher) Mike Cernovich told his followers in a vaguely frantic video that he was at least half-convinced the troll was “a replicant, a demon” sent to murder him.

As it turns out, Cerno talks about demons rather a lot.

Meanwhile, the more overtly Christian right-wing grifter Jack Posobiec, who talks about Satan and his demons even more than Cerno, seems to have convinced himself that the mascot of the Philadelphia Flyers hockey team — who’s been adopted by internet antifascists as one of their own — is literally some sort of demonic being.

Even Stefan Molyneux, the culty YouTube blabber, manages to work Satan into his racist, woman-hating rants.

James Woods, the famously creepy actor who’s turned himself into an even creepier far-right Twitter troll, is a bit obsessed with a certain famous financial wizard.

But Woods takes care to spread his “satanic” accusations around:

Bill Mitchell, another weirdo right-wing troll, has his own obsession:

Bill, Bill, Bill: I’m a registered Democrat. We don’t serve Satan. Hope that clears things up for you.

In addition to Democrats in general, Bill doesn’t much like Gloria Allred in particular.

This, by the way, is what Bill Mitchell looks like:

In case you’re wondering, I did nothing to this picture other than crop it.

Am I saying that Bill Mitchell is himself Satan? I don’t know, but I can tell you this: I’m definitely not going to be making any deals with him. Or any of these guys, come to think of it.

Why isn’t he in prison yet? He’s empowering domestic (American) terrorists with his sort of rhetoric. Can we petition to have him thrown there? Hopefully, it’ll be successful unlike the guys that wanted Clinton in prison.

Man I hate it when I drop all my rational, that stuff isn’t cheap!

I love that James Woods said Baphomet looks like John Podesta instead of the other way around. “Who’s that John-Podesta-looking person?” “Oh, the satanic goat? Yeah, that’s Baphomet. He really does look a lot like John Podesta.”

Has Roosh really found religion? Somehow I doubt it.

Reading old threads… whatever happened to Roosh’s plan to pass himself off as Muslim while in Canada? (Lol, that one felt somewhat personal to me) Did anyone buy it? Anyone not a right-wing arse, that is…

Roosh. Go away. Satan is not the reason women hate you. Your own personality can accomplish that juuuuust fine.

I love how those guys bastardize scripture…

“Hey, what was that think Jesus talked about… ‘Let him who is without sin among you be the first to cast a stone’… naah… ‘Do not judge, or you too will be judged’… that’s not it…. ‘It is easier for a camel to go through the eye of a needle than for a rich man to enter the kingdom of God’… shit, not this either… ”

“How about ‘Everyone you don’t like is either slut, Satan of all of those at once’ ?”

@Bookworm
Was that the same visit where he wore a wig as a disguise and got beer dumped on him?

“If thine eye offend thee, pluck it out…”

Two sharp bricks, Roosh, and your problems could just be flushed away.

Ahem. “If your eye should cause you to sin, pluck it out so that it may tempt uou no longer.”
I’m waiting, Roosh.

Also,
[blockquote]I have now made 3 tweets, each asking Democrats to deny they are the PARTY OF SATAN.

Many hundreds of replies.

The lack of self-awareness astounds me.

Was that the same visit where he wore a wig as a disguise and got beer dumped on him?

I don’t know, but that’s hilarious! If I remember rightly, the WHTM article was from a few years ago; I hadn’t heard of Roosh till 2018 so I don’t remember hearing anything about him coming to Canada.

If he’s in a place where beer could feasibly be dumped on him, he’s not a very practising Muslim, anyways.

Hm. Read that over and realised, ok, maybe it was in a restaurant. Oh well, I already typed it out.

YESSSSSSS! And also this hadith, which puts the onus for non-creepiness squarely on the man:

Al-Fadl bin Abbas rode with the Prophet, and a beautiful woman from the tribe of Khatham came up to them. Al-Fadl started staring at her, making her uncomfortable. The Prophet told Al-Fadl to stop staring; when Al-Fadl didn’t listen, the Prophet caught the chin of Al-Fadl and turned his face to the other side in order that he should not gaze at her.

Narrated by Abdullah ibn Abbas (and lightly edited by me for clarity). I like to imagine the utter pissed-off exasperation of the gesture: literally grabbing a dude’s face in order to make him stop staring.

I think’s it funny when the right demonizes George Soros as a Nazi collaborator. He was three when Hitler came to power and 15 when World War II ended.

It’s the same morons that say that little girl in the one photograph with Hitler is Angela Merkel despite her not having even been born yet when he died.

There is something especially irritable about the blazing, blistering narcissism of a white man screaming “IF YOU DON’T ANSWER MY EVERY QUESTION THAT’S IRREFUTABLE PROOF YOU’RE A SATANIC MONSTER!”

I know power-hungry white men gleefully using religion as a bludgeon to dominate others isn’t news, but it still gets under my skin. It’s so transparent and so vindictive. I just don’t get how someone could decide to lower themselves to such a barbaric, exploitative way of life.

Mexican Hot Chocolate
The Nazis occupied Hungary in March 1944. Soros was a 13 year old Hungarian Jew at the time. His father bribed a government official to take his son in and pass him off as a Christian, to keep him alive.
The government official’s job was to go around confiscating the property of Jewish people, and Soros accompanied him.
For THAT right wing shitheads, including Dinesh D’Souza, have accused him of being a Nazi collaborator.
(Soros turned 14 in August 1944 & the Germans surrendered in Sept 1945)

It enrages me that these keyboard warriors, who couldn’t formulate a moral position, let alone have the guts to put themselves at risk defend one, call a 14 year old kid in an occupied country, a Nazi, for not standing up to Nazi occupiers.
I don’t know what offends me more, their hypocrisy or their ignorance.

I completely agree with you; I do always wonder if they’re aware how incredibly obvious their motives are to the rest of us?

Are there New Zealand Mammotheers? There’s been a mass shooting at two mosques in Christchurch.

feeling really worried about how the apparent references in the manifesto to candace owens & pewdiepie, which to me read like trolling, are going to play out.

(I’m incredibly uncomfortable with this usage of “trolling” here, as I feel like it minimizes the intention of the killer(s?))

I’m on the other side of the ditch, fortunately. Article with updated information. The number of casualties are unknown at this point. Three men and one woman have been arrested, police are still searching for other shooters.

Whelp, time to buy that Baphomet Letterman jacket I saw on Wish, I guess. Along with the “Satan is my Daddy” crop top.

@kupo : as usual, trolling is to be read as “saying aloud your own opinion, but say it’s a joke if you get pushback”

Someone should send Bill Mitchell a .gif of Brie Larson telling Jude Law she doesn’t have to prove anything.

“She is merely the conduit”

Actually, the correct word is “vagina”.

Do you deny that you are the PARTY OF SATAN?

Bill Mitchell, you are knowingly spreading an old canard about the Democratic Party. This vicious story is of course false.

I’ll say it again, as I’ve said it so often: Democrats are the PARTY OF SEITAN, a lovely, tasty, nutritious WHEAT GLUTEN that can be enjoyed by anyone — including vegetarians and vegans — who is not gluten intolerant. If you are gluten intolerant, you can still join the Democratic Party — just bring your own refreshments to our get-togethers.

I hope that this explanation will put an end to this alarming, infuriating piece of gossip that has NO BASIS IN FACT. 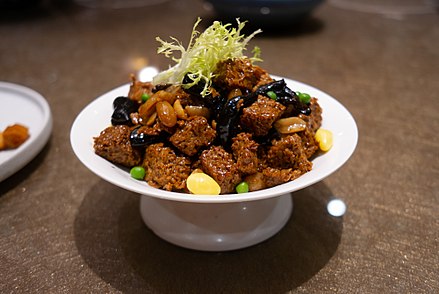 Seitan dish in a Shanghai restaurant 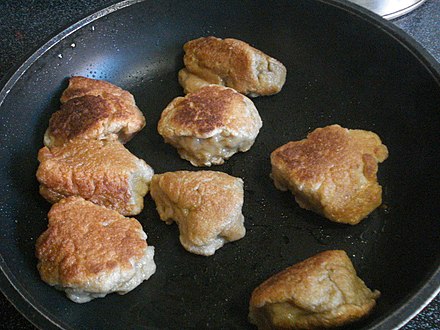 Since the mid-20th century, wheat gluten (usually called seitan) has been increasingly adopted by vegetarians in Western nations as a meat alternative. It is sold in block, strip and shaped forms in North America, where it can be found in some supermarkets, Asian food markets, health food stores and cooperatives.

The block form of seitan is often flavored with shiitake or portobello mushrooms, fresh coriander or onion, or barbecue sauce, or packed in a vegetable-based broth. In strip form, it can be packed to be eaten right out of the package as a high-protein snack. Shaped seitan products, in the form of “ribs” and patties, are frequently flavored with barbecue, teriyaki, or other savory sauces.

I believe you mean “Easily influenced modern women are influenced by Satanic influences.”

Narrated by Abdullah ibn Abbas (and lightly edited by me for clarity). I like to imagine the utter pissed-off exasperation of the gesture: literally grabbing a dude’s face in order to make him stop staring.

This is very endearing. “Al-Fadl, you’re staring. Al-Fadl, you are staring at her. She’s not comfortable. You’re a married man, quit gawking. Al-Fadl…oh, what the hell. I am turning your head. Look over there. Yeah, at the sand dune. All right, ma’am, now what was it again?”

I blame amphetamines for my boners. Remember kids, don’t abuse your ADHD medication.

Dude…can it really do that? is that why I’m like this. I thought it just took away my hunger and made it so I can’t sleep. Are you telling me it can do that shit too. How much do you take? I take 20 mg

Kat, ambassador of the feminist government in exile | March 16, 2019 at 5:40 am
I believe you mean “Easily influenced modern women are influenced by Satanic influences.”

I dunno ’bout all that, Kat. The Satanic Church has some pretty awesome rules.

Like don’t rape people, or don’t hurt kids, or if someone refuses to stop harassing you, destroy them.

(I know they only picked Satan to prod at Christians, I kid.)

And then some of us play the Sabbat sect and like to take a side step away from the Catholic aesthetic every now and again.

I believe you mean “Easily influenced modern women are influenced by Satanic influences.”

I just thought that “influence” needed to make another appearance in that sentence. Twice just isn’t enough.