This one is nearly as ridiculous, and basically fails utterly as a meme,  but at least it’s more-or-less comprehensible.

Feminism is going to cover men in Gynocentrism is probably it.

My guess is that it’s trying to say that feminism claims to be about equality but really, we’re out to cover men with gynocracy.

“Feminism is squeezing out gynocentrism all over men.”

Er. That’s fine as a description of what’s happening in the image, but it doesn’t start to explain the point.

I decided to spend a minute looking up some MGTOW memes too.

Just a reminder that yes, they are part of the alt-right

Why did they pick such a smiley happy guy to represent the victim of an all female murder gang?

Wow. Who knew orangutans were so picky? 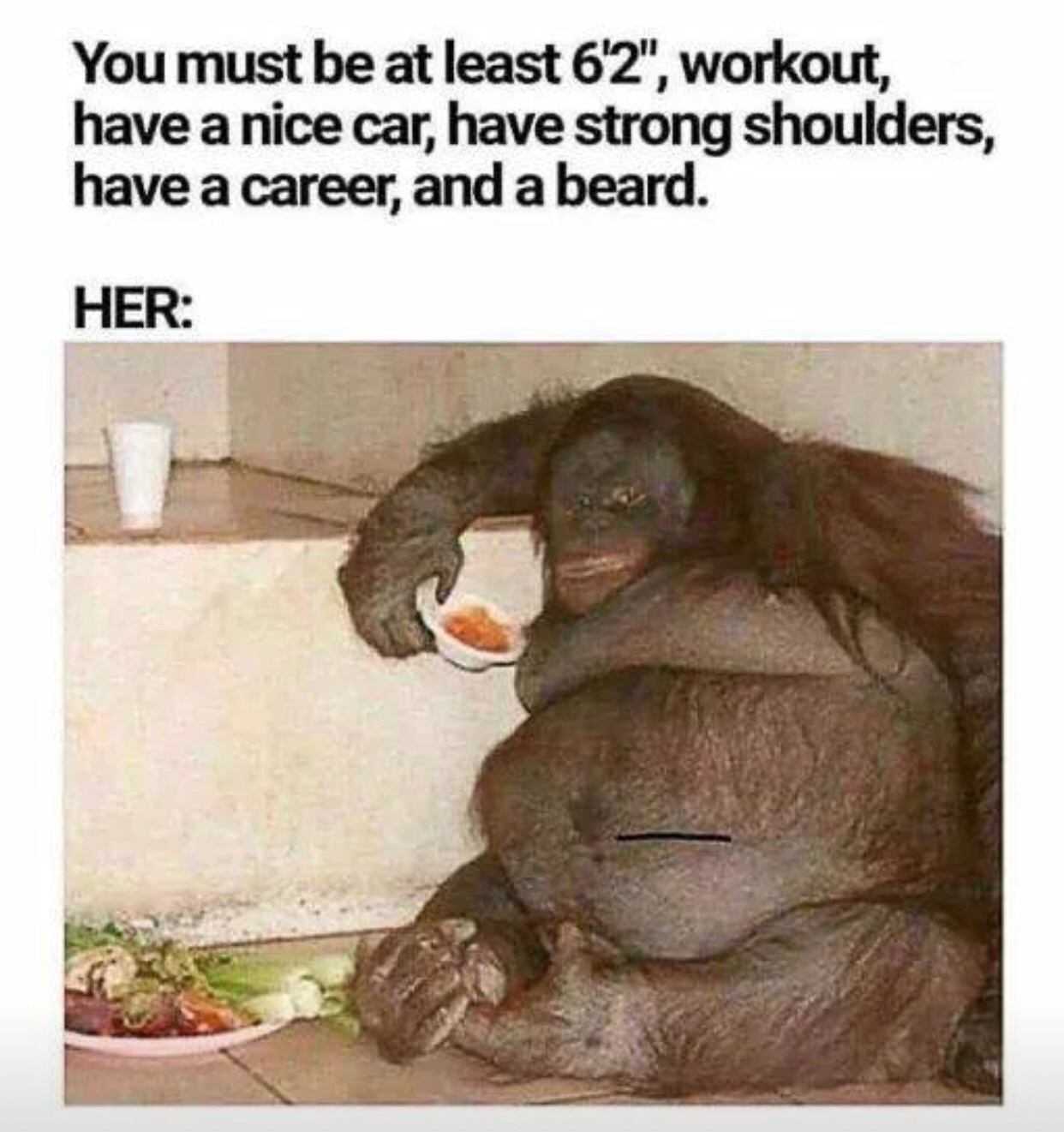 I’m not clear what’s even going on here. I’m sure it’s about how horrible it is that men pay on dates sometimes or something. But there’s no men in the picture so why shouldn’t I think the women just paid their own tab?

I wrongly assumed this was another dumb thing they came up with and googled it. Learned something today, ‘The term gynocentrism has been in use since at least 1897 when it appeared in The Open Court stating that Continental Europeans view Americans “as suffering rather from gynocentrism than anthropocentrism.” In 1914, author George A. Birmingham stated that “American social life seems to me gynocentric. It is arranged with a view to the convenience and delight of women. Men come in where and how they can.”‘

Hmm, yes, 1914 America where men were second class citizens. Six friggin’ years before women could even vote. Kind of hard to imagine that with the onset of World War I, that’s what had this dude worked up.

Do they not understand how soft gynocentrism makes your hands?

wwth, actually that’s an alt-right anti-MGTOW meme. They think white MGTOWs are contributing to “white genocide” by not breeding with the white ladies.

I did a post about this once. The MGTOWs also have anti-alt-right memes.

Natually they’re all nearly incomprehensible even to those steeped in this shit.

That said, I think one of the reasons the alt-right went after MGTOWs is because they recognize that MGTOWS agree with them on most things and the alt-rightists want to recruit the same sorts of guys to their cause and keep alt-right guys from going MGTOW.

But I’m sure there are still plenty of alt-right mgtows who don’t think there is any contradiction between the two very similar belief systems.

Gynocentrism: The packaging won’t impress you, but it WILL make your hands nice and soft and get rid of all those hangnails you like to blame on feminists! Thanks, Gynocentrism!

(This is my educated guess, and I’m sticking by it.)

It puts the gynocentrism on its skin or else it gets the friend zone again.

Although this should not be too much for a man to ask — remember that men hunted the woolly mammoth for ladies and invented the toothpaste tube and throw down their cloaks so that ladies’ little feet never have to touch wet ground — apparently it is.

These are the times we live in, people. The president of the USA is imprisoning babies. The first lady doesn’t care. Life on planet Earth might be facing collapse. And — much more tragic — many manospherians cannot get sex. Not from another human being (unless money is involved).

It’s almost enough to make this feminist feel a slight stirring of pity in her cold, cold heart.

Hm, let’s look into this in an overly detailed way.

Perhaps the tube is supposed to be some kind of medical cream, and a reference to the “drugging” abilities of our evil hypnotic vaginas?

Or perhaps it is a disposable hotel tube of shampoo, and men are being warned that while they think its handy to have around you’re never really going to remember to take it on a trip with you and it’ll just clutter up the back of your cabinet.

Or perhaps, because the tube is TEAL which rhymes with SEAL they’re indicating that gynocentrism has the SJW Seal of Apporval! My gosh, it all makes sense!

Lol, nope. But I can have fun trying.

I think the guy in the photo is about to get busy with MS Paint and a whole bunch of red arrows.

Gynocentrism is the medium for spreading Feminism to Men. That would be my take, but it took too much pondering to reach that point. If a picture is supposed to be worth a thousand words, those words shouldn’t be WARGARBLE. The entire point of these images it to quickly convey ideas, not to some sort of riddle. Even if the ideas are muddled, the images should be clear.

I went to our local pride fest yesterday and marched in our parade,
the signs our five or so nazi protesters had were just black marker on white foam core with zero artistic effort and were hard to read.

Its like the right just can not art or even form coherent messages.

Whatever it is…. these memes really demonstrate just how convoluted these guys’ thought processes are.

TreePerson, that reminded me. Decades ago, marching in the Pride parade, our youth contingent noticed the Turn or Burn godbothering counterprotestors up ahead. As we passed, we turned to face them and chanted, ‘Our graphic design is better than your graphic design!’. They were satisfyingly nonplussed.

Begging your pardon, Yutolia, but: What thought processes?

I think the meme at the top is simply stating that feminism is blanketing men with gynocentricism. Yes, it’s a shitty meme, in more ways than one. Traci Morrissette up above covered it.

I don’t look for any kind of subtlety or competence from these guys.

I don’t know, but I think the ‘(tube)’ must be key to understanding this, seeing as how the meme maker deemed it necessary to add.

@Robert
There actually was a lone street preacher later down the route,
he had like a microphone hooked up to a boombox but he was impossible to understand even with the amplification from across four lanes and a median full of cheering lgbtq+ supporters,
all in all this years homophobes were utterly pathetic and full of fail.

Last year we got one of those out of town evangelical groups their graphic design was better then the nazis’ but was lazy and loud photoshop tier at best but was had to file through them for some god damn reason to get into pride fest.

It’s pretty simple. MGTOWs secretly want feminists to “cream” them with their giant “tubes”. It’s always some weird psycho sexual hangup with these guys. They’d be a lot happier if they just owned their kinks.

Whenever I see memes like this, I ask myself “how can they be so bad at this?” But here’s the brilliant writer N.K.Jemisin with a worthwhile twitter thread about “why bigots are bad at things”:

since i didn’t see it in the other comments, my first thought is that it’s a reference to silence of the lambs. the whole, it rubs the lotion on it’s skin thing. so feminism is forcing men to lather themselves with gynocracy.

It’s dumb, but I don’t think it’s too complicated.

*zips mouth shut to avoid spilling TMI all over the blog*

They say that like “soft” is a bad thing.

It wasn’t always thus. I remember those TV ads for washing up liquid, back when I was a kid.

Scene: kitchen, day. MOTHER is working at sink, and hands something to CHILD, who is faffing around nearby. There is no sign of FATHER, who is off somewhere doing MANLY SHIT.

Child: Mummy, why are your hands so soft?
Mother: It’s because I do all this washing up – by hand, of course, because dishwashing machines aren’t a thing yet. And Fairy Liquid is so gentle, the suds are basically a beauty treatment, when you think about it.

Jingle plays: Now hands that do dishes can feel soft as your face, with mild green Fairy Liquid!

The message was pretty much that patriarchy is good for women, dermatologically speaking. But now we know better.

It’s because to them, wimminz are creamy tubes, gynocentrism is focused on said tubes, and feminists weaponize this for fun and profit?

Hold up. Lemme see if I can get this straight. So, according to Miggies, the problems with dating (as a 20 something man) are:

– “Girls” that listen to music they don’t like (Lana Del Ray apparently. No one tell them about Marina and the Diamonds! If they get to “How to be a Heartbreaker” they’ll flip their shit!) and posting memes they don’t like

– “Girls” that like to read their horoscopes, i.e. participate in things they personally don’t care for or believe in, regardless of their own level of belief in it. (Let’s face it, the poor dudes all think we ALL take it seriously, regardless of what it actually says.)

– “Girls” who are suffering from mental illnesses and need help. (But don’t they claim to care about men being suicidal and “emotionally unstable”???)

– “Feminists”, AKA their personal boogey(wo)men for everything from “I can’t get laid” to “global conspiracy to make cishet white dudes actually face charges for rape”.

No wonder they don’t think they should date, that covers a lot of women. Oh, wait, “girls”.

Because 20 something men are dating people who aren’t legal yet apparently?

My first thoughts on this.

I’m trying to be a little bit funny, but no kidding that is my interpretation of what they’re trying to get across based on the picture and what I know of their…..erm….philosophy?