More than a few observers were surprised, as was I, by the news that the “active shooter” on the YouTube campus today was not another young man angry at the world, but a female YouTuber who blamed company policies for a drop in her channels’ views who shot and wounded three others before taking her own life. [Note: This paragraph has been corrected; see bottom of post for more details.]

Naturally, a bunch of Twitter dudes decided to respond to the tragedy with jokes about women being as bad at shooting as misogynistic idiots insist they are at driving.

Others made inane “ironic” jokes about glass ceilings being broken, welcoming the female shooter, whose name has not yet been released, to the boys club.

I'm hearing rumors the Youtube shooter is a girl. If so, congratulations, ladies. You've proven once again you can do anything a man can do. #girlpower

Hey! Latest shooter is a female! Way to break that glass ceiling ladies!#Equality

Others made jokes about sandwiches and how this means women should stay in the home lol lmao #AmiriteFellas?

Then there were these dudes:

This female shooter has clearly perverted the peaceful teachings of the Holy Book of Womon and isn't a real womon. And before all you womonophobes jump in, the passage about 'kill all men wherever you find them' is taken out of context and is actually a peaceful message.

NOTE: This post has been corrected. The initial news reports suggested the shooting may have been related to a domestic dispute, and I said something to that effect in the first paragraph. The police later released the name of the shooter, Nasim Aghdam, a YouTube creator. NBC is now reporting that she was angry with YouTube for allegedly discriminating against her and filtering her channel in such a way that she lost a lot of her audience.

“Women can’t drive” has been around for as long as there have been horseless carriages. I mean, ‘cmon guys, it’s a machine, delicate flower ladies don’t know anything about those things; the first autos had a lever for brakes and needed hand cranking to start, that requires the truly muscular man-beef of manly mens, not to mention women can’t steer and are terrible at everything.

Until of course there’s an emergency, then we’re good enough to rivet hot plates of steel into a tank and drive them all damn day; good enough to fly planes and crawl through the mud. You know, when it’s important, all of a sudden there’s no goddamn question. But when there’s no war going on? delicate flowers.

But when there’s no war going on? delicate flowers.

I’m just going to leave this here. I imagine Brit Mammotheers know who this is. 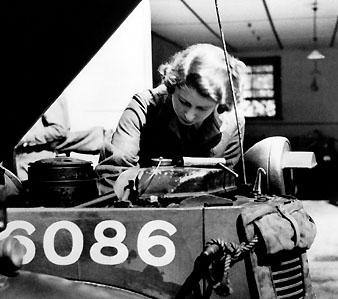 Wait, what? You’re NOT a delicate hothouse flower, blooming only under special care?

My world is shaken. Shaken, I tell you! 😛

Do vaguely recognise her from somewhere … 😛

I love her so hard, she’s so cool. I wish I were that cool.

I wish I were that cool.

You are that cool. And, unlike the Queen, your sword wasn’t just some hand-me-down.

I was thinking of rebuilding my carburettor this weekend. Maybe I’ll give her a call.

It’s a common whinge of mine that reports of legal matters are invariably wrong.

There’s an old line I heard once that needs to be trotted out every so often:

Have you ever heard the news reporting on something with which you were personally familiar, and winced at how inaccurate it was?

What makes you think any of the rest of it is any more accurate?

And yeah, I’ve been in situations like that in my old job which involved radio astronomy and satellites.

Regarding the picture, I seem to recall Elizabeth actually showed up in the ‘Real Life’ section of the ‘Wrench Wench’ page on TVTropes.

Thanks for the welcome!

…delicate flower ladies don’t know anything about those things

Heh. You know what they call the surgical removal of testes? An orchiectomy. I’m sure that orchids got that name because of a superficial resemblance of some of them to the supposed manly bits. Just goes to show where the delicate fucking flower really is. Every time anything turns up in my medical reading with that orchid terminology, I always have a mental image of anatomical pink ladyslippers. Can’t have that here, best remove that nuisance stat.

And not really related here, but I did follow the links to HBomberGuy and was watching his videos yesterday, ending with his takedown of the anti-Bill Nye rage. Here’s the first sentence of the article I was reading on the way to work this morning: “Disorders of sex development are medical conditions in which there is disagreement among the chromosomal, gonadal, and phenotypic sex of an individual.” Lookie there. Sex determination is way complicated even before we get to questions of gender! It’s like biology in real life isn’t a simple binary at all times and in all instances. Who knew? Well, I did. But I’m a biology geek. And of course once the social construct layer is added, and human relationships, then we’re in n-dimensional math territory.

Well exactly. So it seems silly to continue to “@“ me asking my view on it.

Since that’s all Steph decided was worth taking from my post (and they’ve been selectively ignoring vast amounts of everyone’s posts) I think I’m going to have to step back at this point.

@solecism, I am familiar with the term! It might be that I have threatened one or two people with orchiectomies in the past, when they were pissin’ me off. Might possibly have happened once or twice.

And yeah, @dslucia, that’s the biggest concern I have. “Ignoring the good arguments to focus on a weaker side-issue” is – well. I won’t say that Steph is a troll, but it’s certainly what trolls do.

So a couple of things to bring to the table, looks like the “shooter was trans” bit is made up without evidence by transphobic/TERF accounts.

Also Paris Martineau has a good article going into the shooter’s history with YouTube. Looks like she has a long history of posting graphic images of animal abuse as a form of vegan activism, which YouTube de-monetized and censored long before the recent “Adpocalypse” which reinforced her feelings of persecution. Mental health questions aside, there’s a lot of entitlement on display

looks like the “shooter was trans” bit is made up without evidence by transphobic/TERF accounts.

Bits I’ve seen on twitter (which most here will have seen since I’m getting them from commenters here 😛 ) have been “she must be trans since no woman would go on a shooting spree.”

Which is, of course, complete bullshit.

The orchid family is named after the widespread genus Orchis, name of which indeed means “testicle” in Greek, as the plant typically develops two egg-shaped tubers underground.

Sometimes people jokingly use “testeria” in reference to the equivalent of “hysteric” behavior in men (Greek hysterion/orchis = Latin uterus/testis). It probably makes sense to many people, but somehow my inner pedant insists on sticking to Greek.

So, “orchidia”, perhaps? I’m not actually a classics geek enough for this.

Thanks for the etymology!