Oh dear. It seems the Alt-Right is in a bit of a tizzy again, and this time the culprit is Christopher Cantwell, the gun-loving Nazi and former A Voice for Men contributor who gained a certain pathetic notoriety for posting a tearful, fearful video after learning he was wanted by the police for tear-gassing antifascist counterprotesters at the Unite the Right rally last summer in Charlottesville.

Now Cantwell, awaiting his trial, has pissed off a major portion of his former allies on the Alt-Right by admitting that he’s been talking to the feds. The controversy erupted several days ago after the infamous Nazi hacker known as Weev — the guy with the giant swastika tattoo on his chest — publicly accused Cantwell of an assortment of crimes against the Alt-Right movement, the most serious being snitching on his fellow Nazis and Nazi enthusiasts.

“Cantwell … has been run out of other movements for being an embarrassment,” Weev apparently wrote in a forum post Cantwell has reposted on his site, and now Cantwell

has some mythos about how his endless discussions with law enforcement are for the greater good. He’s taking down antifa, he swears!

In fact, that’s a pretty good summary of what Cantwell says he’s doing. In a post on his blog Radical Agenda several days ago, he declared that, yes, he has become a federal informant, and yes, he swears he’s doing it not only for himself but for the greater good of the Alt-Right.

As he sees it, refusing to talk to the feds would mean that he was “acting like a criminal,” and he’s pissed that Weev and other Alt-Nazis don’t understand his allegedly principled stance.

“We are being instructed to behave like criminals by a Jew in a foreign country,” he says of Weev, a vicious anti-Semite who indeed, his mother says, has Jewish blood “on both sides of his family.”

“There is ample evidence that the reds started and perpetuated the violence of Charlottesville,” Cantwell insists,

lied in court to frame me, and had the cooperation of local authorities in this criminal behavior. The feds are our only hope for lawful remedy, and I intend to cooperate fully with any effort to bring these criminals to justice.

My attorney has already spoken with the FBI on my behalf, and we are soon to meet. … While the authorities in Charlottesville and Albemarle have given license to masked thugs and terrorists to wage war on the streets, the FBI seems more interested in stopping the violence, which necessarily means leftists going to prison.

In a followup post, Cantwell insists that he couldn’t really snitch on his Alt-Right colleagues, no matter how many details he gives the feds, because the Alt-Right hasn’t committed any crimes. No, really, that’s his argument.

We are not criminals. If the FBI searched every electronic device I have ever owned and pumped me full of top secret truth drugs and extracted every letter of knowledge I had about the Alt Right, I literally couldn’t give them a single fucking criminal. … We’re not working with foreign governments. We didn’t come to our permitted demonstration intent on violence. All of the information and evidence that I have favors us, and condemns our enemies, and there is a significant amount of it.

Never mind the chat logs showing that many of his fellow Nazis went to Charlottesville not only ready but eager for violence. Never mind all that footage of neo-Nazis in Charlottesville attacking counterprotesters with sticks and fists and pepper spray. Never mind the white supremacist who drove his car at high speed into a crowd of antifascist protesters, killing activist Heather Heyer. Never mind the more than 100 other killings perpetrated by Nazis and others influenced by the Alt-Right in recent years.

Cantwell insists that, despite all the obvious evidence to the contrary, AntiFa were “the primary instigators and perpetrators of most of the Charlottesville violence,” and all he wants to do is to help send them, not his fellow Nazis, to prison.

Seeing as to how there is absolutely no chance I could snitch on our guys EVEN IF I WANTED TO, on account of our guys not having committed a crime, I don’t see how [talking to the feds] could be a bad thing.

More than a few of Cantwell’s fellow Alt-Nazis aren’t exactly convinced by this improbable argument. He’s currently taking quite a virtual beating on Gab — the Twitteresque social media site that’s become a haven for Nazis and other terrible people. Naturally, most of Cantwell’s Alt-Right critics are just as bad as he is.

I have to admit. “Jews spill guns and ammo on their desks” is an anti-Semitic stereotype I had not been previously aware of.

Cantwell does has his defenders.

Some seemed more interested in trashing Weev and his longtime buddy Andrew Anglin of the Daily Stormer than they did in defending Cantwell. One commenter posted this anti-Weev cartoon, which presumably began its life as a piece of anti-Semitic propaganda.

Despite the swirling controversy, Cantwell has somehow managed to find time to post a number of nasty things about trans folks, including this lovely sentiment

He also posted this horrendous meme, which seems to maybe sort of imply that shooting children who support gun control might be a good thing?

It took me a little while to realize it, but the dude in the upper left-hand corner of that lovely meme is Cantwell himself, with Dylann Roof-style bowl-cut hair pasted over his bald head. (Roof, you may recall, was the young white supremacist who murdered nine black parishoners in a Charleston Church; his bowl-cut haircut has become a popular Alt-Right meme. Alt-rightists have also developed very public and only partially ironic crushes on the mass killer’s sister.)

In conclusion, all these people are horrible in pretty much every respect.

I can only hope that everyone involved in the Cantwell controversy goes down in flames.

H/T —  @NYCAntifa, whose tweet alerted me to this controversy, and from whom I snatched that last screenshot. (Hey, making screenshots of Gab posts with images is a royal pain.)

@Chris
Oh, okay, despite all the evidence that David has gathered to the contrary, I guess the alt-right is cool with this. Thanks for clearing that up!

And Cantwell, I don’t know how I missed it the first time, but same goes for you, too.

So, Cantwell can’t do well ? Yeah, it was an easy one, sorry.
Well, if the alt-right drowns itself in its own vomitous rethoric discourse, we can not really complain, can we ?

To griffon8 and others who speculated on the 1433 – you’re right. I did some research on it, and it’s a “play on numbers” from the beloved 1488 (the “holy” 14 words about preserving white culture and white children’s future) plus double 8s for “Heil Hitler” with H being the eighth letter of the alphabet. This is taking that and keeping the 14 for the 14 words and then double 3s for Chris Cantwell.

@BobZeki
You act as though these are separate categories.

We’re not even the ones who brought up an-craps anyway, Bob. It’s in the OP and somebody wanted to know what it meant.

which presumably began its life as a piece of anti-Semitic propaganda.

How did you know? 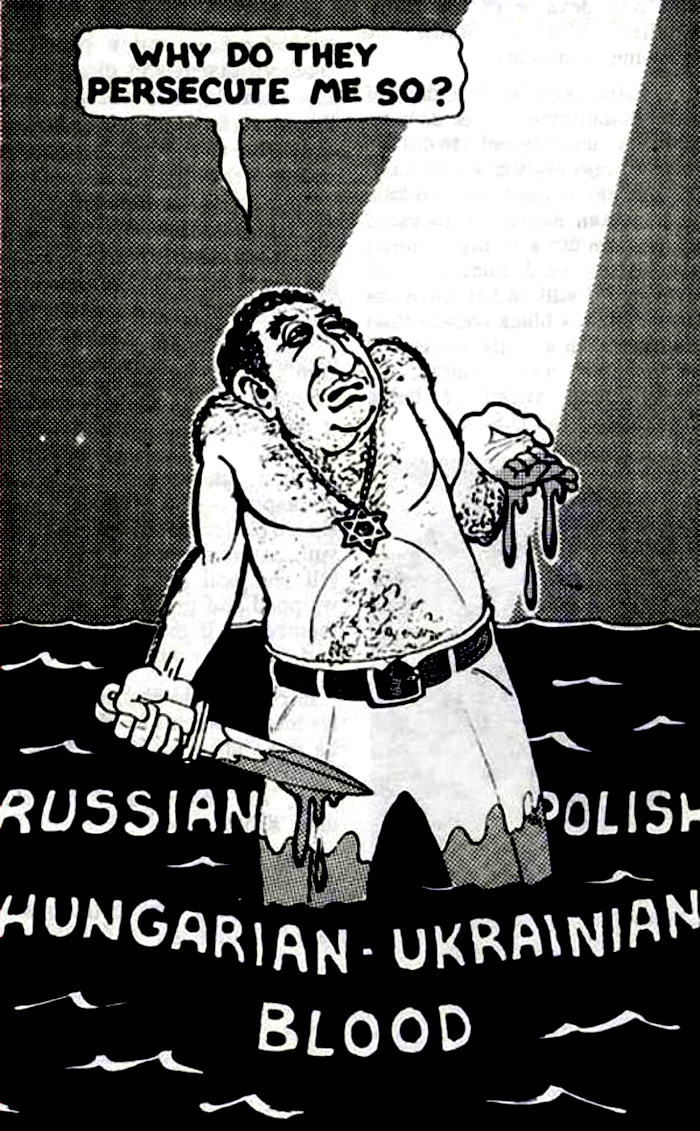