The lady-hating wannabe ladykillers who call themselves Red Pillers love to trash talk cats and those who love them, forever “warning” feminists that if they don’t change their ways, and pronto, they’ll end up living their last years alone, surrounded by cats.

Dudes, I hate to break it to you, but this is not exactly the cutting insult that you think it is because, well, have you seen cats?

Sure, they’re little agents of chaos that leave tiny trails of destruction in their wake, but they are also some of the most delightful creatures on our green earth. Seriously, dudes, go watch some cat videos on Youtube and tell me with a straight face that being surrounded by cats is somehow a bad thing.

Thing is, beneath the disdain that so many Red Pillers profess to feel for cats you will often find a deep, if not very well-hidden, undercurrent of jealousy. How is it that these weird, furry, self-absorbed brats — I mean cats, not Red Pillers — have won the hearts of women (and men) around the world without even trying?

Some Red Pillers are convinced they have the answer: Because cats are assholes.

In one thread  in the Red Pill subreddit from a couple of years ago, one enterprising fellow known as poopin urged his fellow alpha male wannabes to “Have the personality of cats. Bitches love cats.”

“I have always hated cats personalities and wondered why so many girls were so attracted to cats,” poopin wrote.

Cats treat you like shit, are mostly unaffectionate, and are assholes. Yet a LOT of girls love cats. You never hear of cat guys (as opposed to cat ladies).

I have always wondered why girls are attracted to an asshole pet. The Red Pill has made it all clear to me.

He then posted a long list of cat traits, real and imagined, that in his mind make them the ultimate alphas. Cats, he assured his fellow Red Pillers, are

*Cute
*Aloof
*Independent.
*Want affection(rare) on their own terms …
*You serve ME, I do not serve you attitude. …
*I do what I want. …
*Indifference mildly peppered with punctuated affection (to keep interest).
*The only interaction you get is when you play with me (sex)

A note of caution: If you think that sex and playing with cats are basically interchangeable activities, chances are good that you’re doing at least one of these things very, very wrong — unless your (human) partner has, say, a fetish for batting at dangly things.

Poopin is hardly the only Red Piller to suggest that his fellows emulate the “aloof” behavior of cats. “If you want to be more alpha, strive to act like a cat not a dog,” wrote one of his colleagues in a post last year. ” Commenter torodinson agreed:

In a thread from last week, someone called Porespellar declared that

Cats are masters of holding frame

Cats rarely break frame. You can yell at them, threaten them, etc and all you’ll get is a bemused stare back at you. We can learn from this.

As something of a cat enthusiast I have to say that Red Pillers understand cats about as well as they understand everything else — which is not very well at all.

Yes, cats can be assholes. They more or less do what the hell they want, even when they know full well we don’t want them to do it.

But cats are hardly the aloof, indifferent creatures Red Pillers — and a lot of people who don’t actually own cats themselves — think they are. Red Pillers think cats are all like this:

What they don’t seem to understand is that cats are also like this:

Yes, cats can seem pretty aloof to people they don’t know or like, but sometimes their seeming aloofness isn’t the result of indifference but of their social anxiety. Many cats that are notoriously standoffish with guests can be endlessly and often ridiculously affectionate with their owners and other trusted humans, and not just because they want to mark “their” people with their scent. One of my cats insists on curling up in my arms like a (human) baby multiple times a day for as long as my arms (or my patience) can stand it, while the other stares at me affronted like a jilted lover in a Mexican Telenovela.

Cats also have a number of other habits, some deeply weird, that aren’t a good idea to copy if you’re looking to charm your way into someone’s heart, or at least their pants. They like to watch people poop. They sit on your head when you’re trying to sleep. They stick their butts in your face when you’re just trying to watch TV. They walk across your keyboard and sometimes take naps on it. They bring you dead animals as gifts. They sprint around the house at 4 AM for no discernible reason. As the video above demonstrated, some of them just really enjoy knocking things to the floor.

So here’s a thought, Red Pill dudes: Instead of trying to emulate animals, whether gorillas, lobsters, or cats, why not try emulating, I dunno, decent human beings? Play “hard to get” if you want — it’s a time-honored and basically harmless romantic trick of the trade — but don’t fetishize aloofness or turn it into a lifestyle.

There is, however, one thing about cats that some Red Pill pickup artists would do well to emulate. Cats are pretty good about cleaning their own asses without making a fuss about it. Just something to think about, Roosh V.

You live over by the Scrubs?

Belmarsh side of town.

Ooh, they got parakeets there too?

According to our living history repository (neighbour across the road – she’s lovely. Lived in the same house all her life, got her telegram last year) ours are all from a pair that escaped during the bombing. Woolwich area got hit hard – it’s where the Germans would dump their bombs, trying to get the arsenal and docks if they didn’t think they’d make it through the air wall to the city itself.

I know of 6 colonies (they tend to group in no more than about 20 or so) within 3 miles of us. One’s on the barracks grounds, another is just outside the prison, three in the woods on shrewsbury park 🙂 . Cheeky little sods, they are. 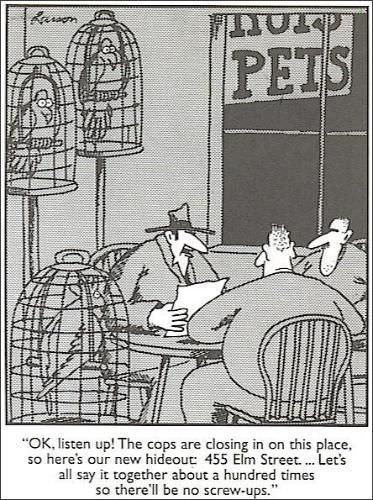 Yes Bacon, we only love cats because of the internet 😐😀
wwth already addressed the feral cat thing perfectly which is good bc it makes me see red.
The cats I’ve had as an adult have all been indoors. So long as they have enough space, plenty of attention and stuff to play with, they’re happy. Toys are cheap as – most cats love cardboard boxes and scrunched up paper.
My current floofs are lucky as they also have a little courtyard garden out back. They’re safe, and other creatures are safe from them.
Now if I could just get rid of the cane toads, the cats could go out back in the evening, too!

Yeah, sadly it’s neither Raptors nor feral cats, it’s domesticated cats, and we even know what their names are.
Sadly the only way to stop it is to keep the cat indoors, which can suck for the cat in small houses.

It just also sucks that as someone who didn’t choose to own a cat, I still have to deal with cat droppings, dead birds and the occasional disembowelled squirrel on my doorstep…

So, there are specific cats with a human/s who are irresponsible and your response is all cats are bad? Seems legit.

I mean, if you don’t like a species of animal, you don’t like them. Fine. Whatever. But considering that they’re beloved family members and friends to a lot of us and more than one person here has shared the story of their cat being poisoned by their cat hating neighbor, it’s seriously squicking me out to have someone coming here and talking about how much they hate their neighbor’s cat. Especially since if said cat is killing and eating that many animals, it’s probably not being fed properly by its humans. It’s also weird that it’s not burying its droppings. Anyway, sometimes it’s best to keep a thought to yourself.

And yeah, I think the irrational hatred so many people have for cats is a product of misogyny. Personally, I love dogs, but they’ve done a lot more to earn hatred than cats. They poop on the sidewalk and in people’s yards and a lot of humans do not clean up after their dogs. Not only that but people are frequently seriously injured or even killed in dog attacks all the time. Yet, people very rarely express such hatred for dogs as they do for cats. I really do think it’s the longstanding association between cats and women that is the reason for that. It runs so deep it can effect people who aren’t misogynistic in general. Sort of like how most of us are more likely to rate women’s voices as annoying than men’s.

Anyway, sorry for all the ranting on this subject but I get protective when people start ragging on a family member or friend. Whether human or other species.

I get this bloody “cats are bad” stuff all the time and I’m sick to death of it. Friends who are self described ecofascists are the worst but many people in general seem to love indulging in it. I don’t care if someone’s not keen on cats but the hating is different.
Like wwth said, some dogs actually hurt and/or kill people yet no-one hates on dogs (& nor should they). The problems caused by cats are largely the fault of humans. We have a huge feral cat problem here because people dump kittens; refuse to neuter their cats; let them roam (they cd at least keep them in at night, honestly) etc etc.
Just stop. It’s horrible and upsetting. I can’t believe we’re doing this on Mammoth of all places.

PSA for cat owners in England:

Since 2014, large numbers of cats (more than 400) have been killed across (mostly) the south east, believed to be the work of one man. See this video for details, including a contact number for Operation Takahe, which is investigating (there are no distressing images in the video):

There’s an #OperationTakahe twitter hastag, if you can stomach it.

Keep your cats indoors at night!

Here’s a quote from a police detective involved in the case: “Cats are targeted because they are associated with the feminine. The killer can’t deal with a woman or women who are troubling him”. One reason the police are taking the case so seriously is the possibility that “at some stage he’ll escalate or feel brave enough to move on to vulnerable women and girls”. I assume this is based on past experience with cat killers; it’s known that serial killers often start with animal cruelty before “graduating” to murdering people.

Moggie – that’s about the Croydon cat killer? (What the local rag calls him, anyway, seems to be his focus).

Can’t do video – gone midnight and my headphones are missing.

Shadowplay, yes, it started in Croydon. Also known as the “M25 cat killer”.

That’s why I push back on cat hate. A lot of animal cruelty seems to be centered on them. I think less of that would happen if it becomes less socially acceptable to hate on cats. I’m not saying everyone needs to want for a pet but.

Thank you! Pain not knowing where my headphones are, don’t want to wake my partner. She’s due up for work at 5.