Welcome back to what has become a veritable MGTOW weekend here at We Hunted the Mammoth!

So I’m browsing through yet another interminable discussion of sexbots in the Men Going Their Own Way subreddit, and once again the consensus seems to be that sexbots will soon be here in a big way, rendering flesh-and-blood women obsolete, because of course the only thing they’re good for is sex and they aren’t even any good at that, ha ha sucks to be you, women!

Heck, already there are some sex bots that aren’t creepy like haunted dolls.

“The Harmony robot prototype blinks and moves her head,” noted one commenter. “As soon as she did that, she seemed real to me and no longer creeped me out.”

“It’s impressive,” replied another. “I’m fairly certain we’ll have the formula cracked [within a decade]. Now all we have to do is finishing work with artificial wombs and we’re all set to finally say: ‘Begone thot!'”

Then I saw this comment from the OP and it sort of threw me for a loop. Responding to someone noting that it still wasn’t socially acceptable to take one’s sex doll out in public, he declared:

Oh, wait, I’m pretty sure these guys don’t want lesbians tagging along, so take off that first L.

So far this new movement hasn’t made much of a splash. The only person who responded to the comment got hung up on the bit about the eggs.

Well that took a turn, huh?

But you know what? You be you, guys. If you MGTOWs, in the privacy of your own homes, want to have sex with sex dolls or sex bots or egg yolks, if you want to fry up your own semen or mix it into a smoothie that you yourself will be drinking, go right ahead, it’s your right. (I’m a little less enthusiastic about the sink shitting, if only because I suspect that at some point a plumber will have to clear that out for you and that’s not a nice thing to do to a plumber.)

Yes, I make fun of the MGTOW obsession with sex bots all the time. But that’s not because it’s inherently pathetic to sex up inanimate objects; lots of people do that, many of them on a daily basis. It’s because you guys insist that these particular inanimate objects will somehow replace women because women suck and ha ha sucks to be you, women!

And it’s not even the misogyny itself that’s pathetic. It’s that your endless sexbot discussions absolutely reek of sour grapes. If you really thought that women were so easily replaceable, that they were truly as worthless as you so often declare them to be, you wouldn’t spend every spare second of the day talking about them on the internet, would you?

Speaking of which, this post will mark the end of this impromptu MGTOW weekend. Because spending even a weekend with you guys in my head is really kind of depressing.

On contrary, it puts you on the high road to shitlordhood and alphadom. That’s a little-shared secret, and you heard it here. Now go forth, squeezeonein, and conquer. Do it for all our sakes, as well as your own.

{squeezes tears of wheezy laughter out of both eyes}

a book titled, I believe, “Natural Harvest” that is all about cooking with semen.

As opposed to, idk, vegetables, which are so unnatural?! OK, I guess they are, if we consider “selectively bred for centuries to make them better food for humans” unnatural.

If they wanted to really stick it to the sexdoll-hating feminists, they’d dredge it with flour first, then roll in breadcrumbs afterwards.

I need that book!

And: dvärghundspossen, I’m actually going NEI! Tell me more about that guy!

Zaunfink: Well, I only knew him very vaguely. He was really weird overall. A friend of mine, though, thought he was interestingly excentric and developed a crush on him. She was the one who told me that he once made an omelette with his own semen.

Ugh. Trump has officially called for the death penalty for drug dealers.

Is this even enforceable? I thought the death penalty for crimes other than murder was ruled unconstitutional as it’s cruel and unusual punishment? Anyone know more?

In the future….
Sexbot- “I’m leaving you Paul”
MGTOW- “but I designed you to be mine!!” who is it you vile female?”
Sexbot-“your toaster Paul, she has always been kind to me unlike you.. “

(The following will conflate sex and gender for simplicity’s sake)

When women are framed as a tool necessary for male reproduction, sometimes you get the impression that the very existence of the human female is somehow supposed to be conditional on this reproductive use. Like, when we finally have artificial wombs (and stem cell eggs, I suppose), women will simply disappear like some obsolete technology nobody wants to buy or manufacture.

Now, in reality women exist because roughly half of human embryos spontaneously develop on the female pathway. And, obviously, both sexes are (currently) equally necessary for each other’s reproduction.

Now, we’re already increasingly able to select the sex of our children, and it has resulted in some “deficit” of women China and India because families (usually consisting of a mother and father) favor sons over daughters. This deficit is known to be a problem for the society, when heterosexual pairing is still very much considered a practical and normative necessity. However, families seem to expect some other family will raise a daughter to marry their son – and if not, they can’t do anything to help that.

However, in developed societies (including, increasingly, urban middle class China and India, I think?) there doesn’t seem to be particular preference for either sex. Presumably, this would also apply if we stopped using female bodies (or male bodies) for reproduction. So people would still have both sons and daughters.

Now, it’s faintly possible that men with access to independent reproduction might indeed collectively abandon women, if they’d rather live and raise children with robots. Would the men still want to raise daughters along with sons? Possibly not.

More interesting question is, would the the men want to raise enough sons to sustain the male population? Even with sophisticated robotic help? Maybe, but who knows.

Presumably, in that scenario, women would also be able to reproduce independently – actually it could be a case of women actively segregating themselves from men rather the other way round. Then, If it’s actually true that women are indeed naturally more interested in raising children, the whole human reproduction would disproportionately depend on women (and their robotic help).

More to the point, the survival of the male sex might actually depend on whether women still want to raise sons along with daughters.

Oh wait, did I say “goofy” or “scream-yourself-awake nightmare”?

It looks like there’s laws on the books in some states to give the death penalty for drug trafficking but since it hasn’t been applied no one has taken it to court so the legality might be up in the air. Is that about right?

I’d also be interested to know what the details of this proposal are. If Trump even thought of any. How much drug would have to be trafficked and which drugs specifically? How much is it going to cost to put a ton more on death row. He also seems to only want this apply to drugs coming in from Mexico. Are domestic drug traffickers exempt? Are sham “pain clinics” that exist to prescribe pain pills to anyone asking for it exempt? Are the owners of pharmacies that act as fronts for dealing pain pills (a thing that exists in places like West Virginia) exempt?

This is my favorite drug PSA. From my youth in the early 90’s

This is another classic

Good afternoon everyone! I come bearing gifts of salt from 4chan!

Is that about right?

That appears to be exactly right.

Of course if the president of the electoral college succeeds in his plan to stack the court with his mates, who knows what might happen on appeal now.

You know, if the courts rule that causing a death indirectly by trafficking drugs is death penalty eligible, wouldn’t that open up a whole can of worms? Like, if an energy company is negligent with worker safety and miners die, couldn’t the execs responsible be given the death penalty? That kind of thing? Whether that would realistically happen, probably not, but it seems like in theory polluters and owners of companies that neglect workplace safety and owners of companies that put out dangerously faulty products could be opened up to capital murder charges rather than just civil suits.

This is finest salt. I believe you have to insert a URL that ends in one of a few recognized extensions, like this one: https://i.imgur.com/BX 8WaAV.png (delete the space) 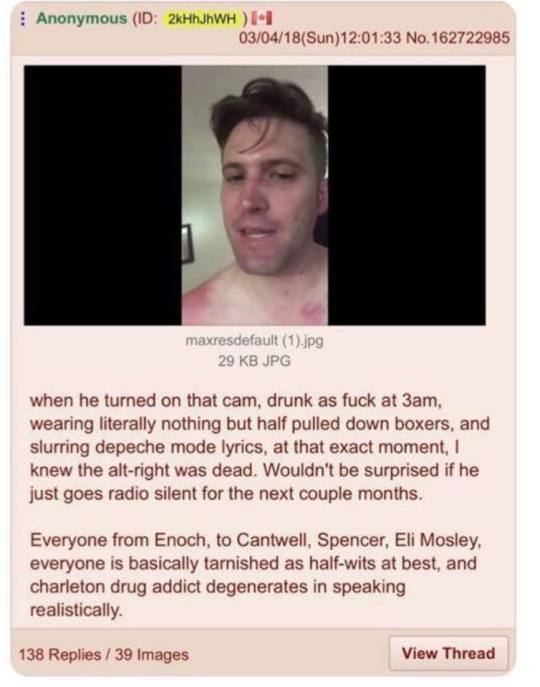 As if the Cambridge Analytica story wasn’t disturbing enough already

I really, really, really hope this is the thing that finally prompts governments to start regulating social media companies more. If we don’t nip this shit in the bud soon, we’re going to end up in a sci-fi dystopia where every aspect of life is controlled by a corporate surveillance state.

Unrelated to anything, but just sticking this here for victorious parasol

Uber just killed its first pedestrian. In Arizona. Where the state governor has been relaxing regulations so as to encourage self-driving car testing.

You can’t talk about Canadian PSAs without presenting the classic “Don’t You Put It In Your Mouth.”

Or Astar the Robot.

And possibly the greatest Canadian PSA of all time, the original Old Lady Who Lived in a Shoe fire safety PSA.

That gives me a really warm feeling. Thank you for sharing.

I was thinking about Astar the robot a year or so back and wonder if a safety PSA addressed to robots would feature a human saying “my skin can heal itself — yours can’t.”

Weird (America Where Are You Now? Don't You Care About Your Sons And Daughters?) Eddie

E.T.A. by the holy white… whiteness… what is the igno-right COMING TO????? 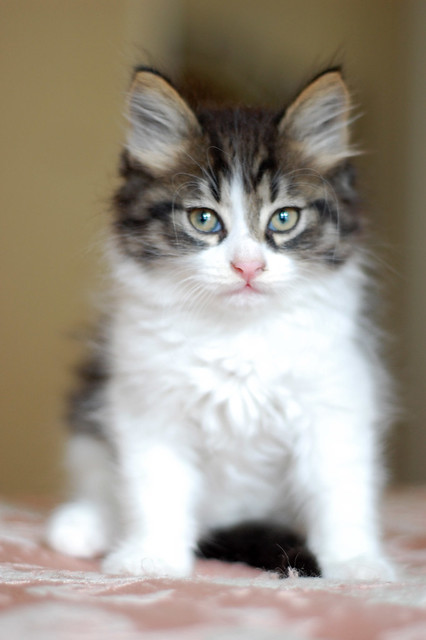 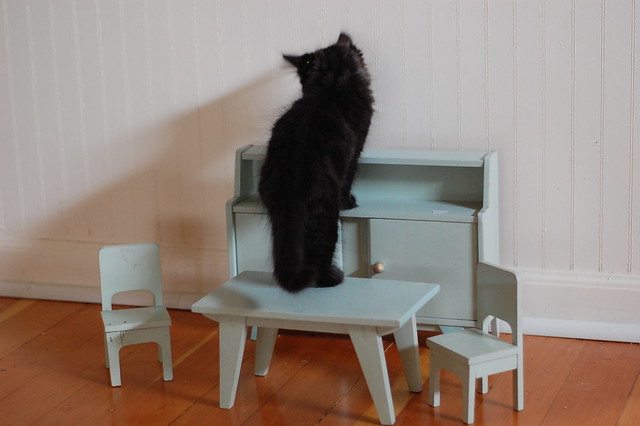 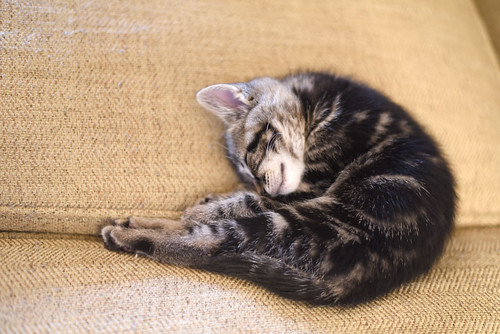 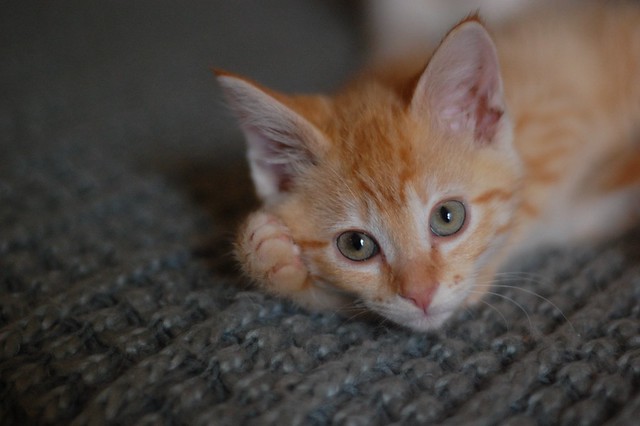 (These are all from the itty bitty kitty committee)

Ah yes, the War Amps. I remember my dad got a War Amps windshield sticker for his old ’91 Subaru Legacy wagon. Miss that car. Haven’t seen much from the War Amps of late… they still around?

They really need to remake that House Hippo PSA for the Internet. Might result in less conspiracy bullshit.

Oh, and who can forget old Bert and Gert?

Thanks for the heads up! I’ll be sure to try it in the future.

Sure is. The guy has been constantly moaning about his speeches not being fun anymore because Antifa violently shuts him down every time and he’s running out of venues (a.k.a. safe spaces) to promote his violent vitriol towards minorities. The picture brought a tear to my eye.

@Katamount, yeah, the War Amps are still around. I got one of their key tag things again within the last couple of years. I have no idea how I ended up on their mailing list. During football season they run ads for their kid safety ambassadors, hanging out with their local CFL team.

Wow, here I thought these guys only wanted women to lie still and it turns out they should also move their heads and blink, too. The bar keeps rising.