Ok, today is International Cat Day, so I’m going to celebrate by keeping the politics tweets to a minimum, and loading up on cat pics instead.

EDITED TO ADD: Ok, I’m adding some N. Korea tweets because  holy fucking hell Trump could get us all killed.

JUST IN: POTUS comments on North Korea from Bedminster, per press pool pic.twitter.com/1cbXufwEOn

We've based 70 years of nuclear deterrence theory on a model of nation states as rational actors. Now we have Kim Jong Un vs. Donald Trump.

You know what would reduce the threat of nuclear war with North Korea? A fully-staffed State Department that actually cared about diplomacy.

FYI the whitehouse silence on the Minnesota mosque bombing is intentional. They hate muslims and want to dehumanize them as they abuse them. pic.twitter.com/qvaF6WD2NR

It has been nine months since the election. pic.twitter.com/GpuLIs5Pi4

And now, the cats!

My lovely, hilarious cats, when they were babies. (Greasy fur due to ear drops that Pantz did not want in her ears.) #InternationalCatDay pic.twitter.com/cQMYVBuaBq

That last one was just a test to see if you were still paying attention.

Yeah, who really thinks there is only one cat day a year? Not cats, that’s for sure.

The buttery males. They will never let them go. They seem to be their second best derailing tactic. Their first being Trump’s words and actions. 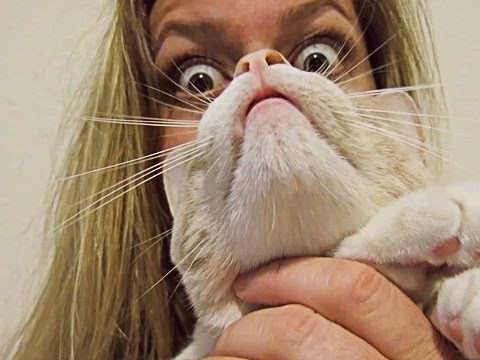 The Dodo video is worth turning the sound on for.

I thought every day was cat day?

Every day is Cat Day for these two.
http://i.imgur.com/clbW05r.jpg
Vashta Nerada, who got the name for doing what Vashta Nerada do and eating everything presented to him as a kitten. He’s super sweet and super chill, but he’s a total mama’s boy and will gladly abandon everything and everyone else to go *flumph* on her lap.

http://i.imgur.com/Oda6xT6.jpg
Minerva Mc-friggin-Gonagall, the Best Pud-Pud*, a fluffmonger of dubious provenance, her only history prior to our adopting her being two run-ins with Animal Control, neither listing her as owned. We’ve had her about six months now and while she can still be a bit fearful (as the scratches will testify to), she wants to be someone’s sweet kitty. A total daddy’s girl, too, which is great because I’m “daddy”.

The three stooges truly are Limbaugh, Hannity and Beck

Ran out of edit time while I was hunting down their tags.

Vashta’s:
http://i.imgur.com/2DscQGhm.jpg
Due to the episode titled “Forest of the Dead”.

Got some emails on your paws? Lick em off!

Those cat faces are the best but you forgot a classic. A new quote from the President:

Awesome. Things are going so well.

@Weird Eddie: In all fairness, Glenn Beck has expressed horror and remorse at what he helped usher in with Trump, which is more than most conservatives. Even stuffed-shirt assholes like George Will are still pretending that this disgrace happened entirely despite, rather than because, of their long-standing efforts, while Beck has publicly asked “My god, what have I done?”

So, Trump watched Game of Thrones recently, and utterly misinterpreted the battle scene?

As much as I usually love being right, I didn’t want to be right about Trump wanting to take us to war with N. Korea. Fucking hell.

Will have to remember to give Toni and Dracarys some catnip today. They’re so lucky they’re cats and don’t know what a Trump is.

Now that I can’t get images from The Dead Zone out of my head– do you think Trump would try and use Barron as a human shield?

JS, I’m sorry, but Catman’s cowl is brown, not black.

This idiot convinced tens of millions of people that it was a good idea to give him a nuclear arsenal.

Since we’re sharing cat stories…I used to have a long-haired cat named Callie, who I would take to get a bath every year or so, whether she needed it or not. I usually took her to a professional groomer for this operation, because not only did Callie dislike baths, she also couldn’t stand to be combed or brushed. I had to deal with copious growling, and determined attempts to bite and/or scratch, sometimes successful…once, she managed to scratch the inside of one of my nostrils, after I let down my guard a little. Well, I described Callie’s usual reaction to being brushed to her groomer, and the woman’s response was, “That SWEET KITTY growls? Callie growls?”. As if this simply wasn’t within the realm of possibility.

At that point, let’s hope the chinese value the world still existing over supporting North Korea.

Much better. Even the stubble looks like it should.

@History…
So, that table is (wait for it) the Cat Bird Seat.

We’ve based 70 years of nuclear deterrence theory on a model of nation states as rational actors. Now we have Kim Jong Un vs. Donald Trump.

There’s this quote from The Great Gatsby I’m trying to remember, something like “a bad driver is fine as long as they don’t encounter another bad driver?”

The three stooges truly are Limbaugh, Hannity and Beck

Replace Beck with Alex Jones, and you’ve got it. But then you’ve left out Michael Savage. And …

@HawkAtreides – ooh, your cats and their names are so cool 🙂

About Trump starting a war – I don’t have much to say about that, except I hope he doesn’t.

Today I did something besides work! I saw a movie called Two Soft Things, Two Hard Things – a documentary about LGBTQ rights in Nunavut and the origins of the pride parade there! Here’s a link and here are some things the film said:

-Nunavut is the newest province in Canada (1999). It separated from the Northwest Territories to become a majority Inuit province. I knew this – what I didn’t know was that many Inuit were forced off their land in the 1950s and 1960s to make way for Cold War defense systems. The creation of Nunavut was a way to reclaim some of what was taken.

-Jack Anawak, a former MP and one of the people interviewed, was instrumental in getting the Nunavut legislature to recognize sexual orientation as a human right. At that time, the document didn’t include gender identity/expression as a right, but now it does (as of March 2017)! (The filmmakers said so in a short Q&A after the screening.)

-Although gender roles were fairly strict in pre-Christian Inuit culture (men were usually hunters, women would do the food/clothing prep) there wasn’t a sense of sin/shame around gay sex or alternate sexualities. That came with Christian missions and colonization. And with the influence of the church and other factors such as isolation, it was tough to grow up LGBTQ in Nunavut for a long time. That’s changing, thankfully.

-Two teenagers were interviewed near the end – one was a trans boy, maybe 16 or 17, who talked about his experience being accepted by the school he was in. One was a younger boy, maybe 14 or 15, who’d recently come out. He said that in the past generation, people couldn’t come out as gay in high school but had to wait until they were “really old” – that got some laughs in the theatre. 😀 But it was heartwarming to hear about things changing for the better.

Clearly the last picture is the best, and I’ll fight anyone who disagrees.

I celebrated Cat Day by finally being the one to do the sticking* instead of holding when Catbeast got his sub-q fluids last night.

Unrelatedly, poor Catbeast fell off of the bathroom counter and sprained his leg over the weekend but is much better now. He even walked into his carrier ON HIS OWN for the vet visit, so I guess he knew he needed to go to the vet.

We are also in the middle of a visit from Kidbeast which has been very pleasant.

*because Husbeast will be gone over the Labor Day holiday and my friend who usually helps me when he’s gone will be on vacation, too. I have gotten a new-fangled harness thingy to help me do the sub-q thing on my own and will try that tonight. *crosses fingers and knocks on wood*

@Hambeast BTDT, for someone else’s cat. Feels weird to be “inflating” a cat, doesn’t it? Luckily most cats seem to realize the minor discomfort is worth the feeling better afterward.

I don’t have any cats of my own, but I do take care of them for other people.

I hope this is ok, I want to see the happy cat posts too, but I need to express this somewhere. Mere months after Casper left us due to adrenal disease, Tyra has osteosarcoma. Getting multiple cats at the same time has downsides 🙁

Condolences Brony. I know how hard it is to lose a furry friend.

Thank you everyone. I’ll post some pics of them tonight.
https://youtu.be/xQ49jtlz_3I

Don’t have any photos of the cats I know/knew handy, but then I remembered an old photo of President Clinton’s cat Socks and some news photographers that I thought all y’all might find funny. And also found a couple more funny ones from that same search: ETA: the last two links is a pic of Clinton and his dog. Trying to find a better link before the window timed out on me.

Okay, the last pic of mine that isn’t displaying right came from this Asian (Chinese? Japanese?) blog/tumbler, and is the 9th pic down.

The post, based on the rest of the pics, seems to be about various US Presidents and the dogs they had while in the White House. I recomend ‘reading’ this post for the pics. Some of them are pretty funny and/or interesting. I rather liked #15, 16, and 17 myself.