When visionary painter Hieronymus Bosch (1450 – 1516) began his “Donald Trump in Bathrobe” series in the last decade of his life, his contemporaries were baffled, if fascinated. Who was this mysterious yet horrifying “Donald Trump?”

Bosch couldn’t tell them. He didn’t know. The images of “Trump” had first come to him in a dream, then began to haunt his waking hours. He had hoped to exorcise the horror by painting these images, which he returned to again and again. But no matter how many Trump paintings he painted, he could not free himself from the terrifying visions.

In August 1516, after six years of painting nothing but “Trumps” he died screaming

In English: “Donald Trump is the antichrist, repent now! And do not forget the demon lady Kellyanne Conway. There is no such thing as the Bowling Green massacre.”

At the time, no one knew what he was talking about. It is only now that we can grasp the true significance of his warning.

Here are several other paintings in the haunting and mysterious “Trump in Bathrobe” series.

I still find it strange Spicer was insisting Trump didn’t own a bathrobe. Since when does a hotel owner not have a bathrobe?

Since when does a hotel owner not have a bathrobe?

To be fair, when I stop in hotels the owners are lucky if I leave the furniture, nevermind the bathrobes.

It’s strange to see what the Trump administration is focusing on for their complaints. Unfortunately for Trump, he’s been in the public eye long enough that there’s plenty of evidence to refute any “I never said that” or “I never wore that” defense. Though I do worry about refutation fatigue.

(I have a confession to make. I pretty much work in slippers, bathrobe and pyjamas all the time. Working from home and all that. I don’t think that Bosch ever painted a series of horror-paintings on me, though)

Though I do worry about refutation fatigue.

That’s a BIG concern. We’re trying to resist a force which is ever more ridiculous every day, and so many of the people just believe the sun rises wherever the dumpster says it rises.

I still find it strange Spicer was insisting Trump didn’t own a bathrobe. Since when does a hotel owner not have a bathrobe?

I’d ask “since when does a serial adulterer not own a bathrobe…” This is a person who spent his entire adult life in the “Playboy Magazine” society… goddam right he owns a bathrobe, and I’d bet real long odds he spends a LOT of time in it.

@Weird Eddie
Re:Devos
Events like that are a major reason for resistance fatigue. Every loss weighs down more and more until apathy sets in. I’m still going to call as much as I can, but stuff like this can be demoralizing.

@ Man Boobz, did you put that Dutch text through Google translator? As a native speaker, it’s not half bad.

Love the top one! I’ve been dusting off my very dusty, never-learned-very-well-in-the-first-place Dutch and laughed so hard at the quote!

Oh, goody, I love Hieronymous Bosch! Do “Francis Bacon does Donald Trump” next!

As a native speaker, it’s not half bad.

If any of his hotels provide bathrobes then technically wouldn’t he own a lot of bathrobes? Even if people did frequently steal them.

Events like that are a major reason for resistance fatigue. Every loss weighs down more and more until apathy sets in. I’m still going to call as much as I can, but stuff like this can be demoralizing.

Agreed, and that’s what trump, and particularly bannon, are counting on, that they’ll be able to exhaust the resistance. Fortunately, the “summer of our discontent” is coming! in my experience, summer protest boils up better….

I have two bathrobes but I almost never wear them. I just put on pajamas after my shower because I typically shower in the evening.

Hieronymous. That takes me back.

Maybe he doesn’t actually own a bathrobe – he steals them from other hotels. 😉

Oh, he owns bathrobes. He has the BEST bathrobes. Fantastic bathrobes. You’ve never seen bathrobes like these. Amazing bathrobes. I’m not even kidding, folks. Total winners.

Bathrobe, hell. I’m still wondering what the hell this swan-chair thing is all about: 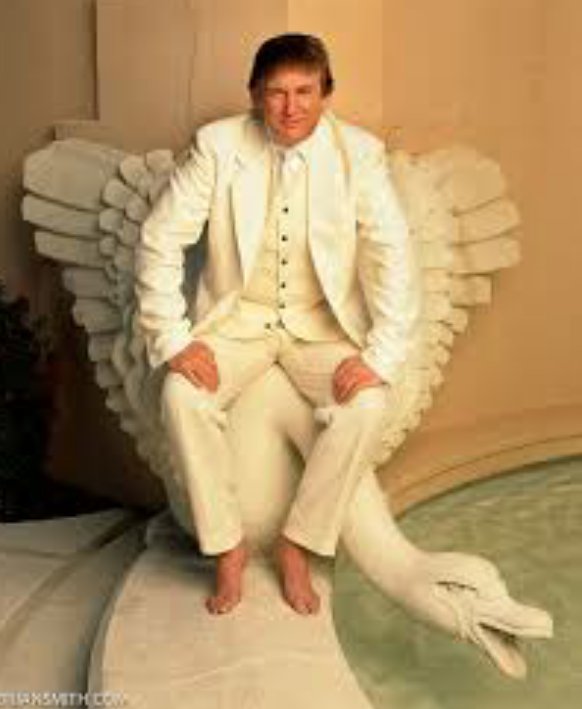 And also, this interesting statuary, juxtaposed with him getting quite inappropriate with Ivanka:

Dubious taste: He haz it.

I pretty much work in slippers, bathrobe and pyjamas all the time. Working from home and all that.

Let’s face it : it’s the best way to work, and live, for that matter.

I did not need to see the second one .-.

But yeah. He’s the embodiment of bad taste. His “brand” too.

@Bina
Those bird statues look like they’re in agony.

Same here. Both my senators voted for this horrendous woman.

I already sent them an angry tweet. Here’s hoping they get sacked in the midterm elections!

Ok kids, when you grow up, dont forget what your mother and I taught you. Its perfectly fine to make another mans appearance a butt of your jokes and immature behaviour. Just shows people that the bar isnt very high on this blog. David, nothing like just mailing it in.

@Concerned Parent Troll
Okay kids, when you grow up, do not forget what your mother and I taught you. It is perfectly fine to defend a fascist demagogue by claiming feminists are as shallow as your fellow MRA by judging by appearance rather than character. If you call them immature, it’ll cause them to panic like headless chickens as they put on their big girl makeup. Remember to keep ignoring any post regarding activism, mockery of manosphere behavior, and consolidation of reasons why Trump is terribad. Just shows people that the troll bar isn’t very high. Concerned Parent, nothing like phoning it in.

@Concerned Parent, your complaint would carry more weight if you were actually a member of this community instead of just a voice telling us to shut up and sit down.

Come on in! Talk with us! There’s more than enough to talk about after all. What are your thoughts on the proposed Woman’s strike? Once you’re actually someone who’s known to be a good egg, then maybe your complaints will carry weight.

Spicer is all like: Bath…robe? No, no bathrobes here. What even IS a bathrobe?

I’m just amazed he picked the bathrobe of all things to complain about. I own a bathrobe (or as I’d call it, a dressing gown.) Everyone in this household (two men, two women, and two teens) owns a bathrobe.

What is so damning about owning a bathrobe?

@Zephkiel – Feminist MGTOW
It’s not the bathrobe we’re damning. It’s the person in that bathrobe that earns ire.

Oh, I know that. I was meaning Trump and his mouthpieces – they specifically go out of the way to spell out that he doesn’t have a bathrobe. Why? Owning a bathrobe is a normal occurrence – even to spend time wandering about in it. Why deny the bathrobe, of all things?

I join you in cursing the obnoxious orange. /ragefist

Ooh, can I steal that for if I ever need a martial arts superhero name?

Probably the only thing they felt they could address. It’s not exactly gonna be easy for them to keep saying that things haven’t gone to hell in a fake-gold-plated lunchbox, so instead they’re going the “Nah it’s not a total fiasco, he doesn’t even own a bathrobe !” route.

Re : hotel owners and serial adulterers

Rapists too, if you’ll remember Strauss-Kahn. I kinda hate that the best article of clothing ever created by humanity is always associated with the worst sleazebags.

WE MUST TAKE BACK THE BATHROBE.

Oh, give it a rest already! David has literally posted several thousand posts about all kinds of sexist and racist shit, that you are more than welcome to read. Some of which have discussions underneath about making sure we do not centre on an opponents appearance.

Both articles you’ve whined about didn’t actually mock Trump’s appearance directly anyway- they were pictures put through filters, nothing more.

Your act is quite transparent- you don’t really care about this blog- you simply want to feel superior.

Ok kids, when you grow up, dont forget what your mother and I taught you. Its perfectly fine to make another mans appearance a butt of your jokes and immature behaviour.

Is that really what you got from this? That Dave is mocking Trump for occassionally wearing a bathrobe (as tons of people do) and possibly looking a bit silly in it? Not for Trump’s insistence on treating his preferred versions of events as fact, and insisting that his staff do so as well? Not for his number 1 priority being his brittle, shattering ego?

I guess the image of Trump wearing bathrobe could weaken his strongman public image.

Anyway, he apparently constantly needs something to argue over with the reality-based media, to distract from his other disagreements with reality. Something relatively small and innocent, but stupid enough to draw attention. Something his loyal followers can easily ignore or deny, and dismiss as irrelevant.

I just recently heard that the Finnish foreign minister was invited to Trump’s prayer breakfast. He’s a socially conservative racist-lite populist, but nevertheless looks decent and highly professional in comparison. I noticed he started getting slightly squirmy when commenting on Trump administration after the first week.

I’d have wanted to see his face when the Apprentice comment came out.

Ha ha, ace post David. Must compliment Bosch on his painting of DJT’s legs in the last one. I’ve never found him the least bit attractive, but in that rendering I though “Hey, not bad legs.”

I’m not a bathrobe wearer, but even I own a bathrobe. I wear it when I dye my hair.

As for work at home days, I never wear pjs or bathrobes, I wear raggedy sweats.