As you may have noticed, I like playing around with graphics software that allows you to create unique filters for images that are based on other images. I don’t quite understand how exactly it works, but the results can be pretty, well, interesting.

While I was playing around on DreamsopeApp over the weekend, I wondered what would happen if I ran some pics of our grotesque so-called president through filters based on pics of kittens. Would they turn Trump from a deplorable to an adorable?

The answer, of course, was no, as the pic above makes clear. Here are some more of the results of my experiment.

You have not improved Trump, you have ruined kittens!

Remember that photo from a few years ago of the cycloptic kitten foetus?

I will have nightmares of that. Seriously. Especially because of the eyes.

Unrelated : I dreamed about becoming a transsexual (in a positive way, aka improving my life) like one week ago, and it linger in my mind. Not sure what, if anything, to do of that.

Bejesus, I’ve been known to drip mustard on crime scene photos; but those images are truly horrible.

The first photo reminds me of that dog whose owner dressed him up as a giant spider to terrify people on the subway. Lots of eyes and misplaced fur. He’d possibly enjoy the comparison – Trump, I mean, he’d get off on upsetting people, whereas the dog was innocent of malevolent intent and only wanted to be friends.

What did these poor kittens do to deserve this?

Also, can anyone point me to the part of the law where it gives federal judges the power to rule on things like the Muslim ban? I was trying to find it earlier for a friend but I couldn’t dig anything up.

Short answer: Article III of the Constitution as interpreted in the case of Marbury -v- Madison [1803]

So, Mike Huckabeast made a transphobic rape joke about Chuck Schumer

Hopefully that’ll lead to it. I can never get tweets to embed from my phone.

It’s so laughable that anyone can claim that right wing fundamentalist Christians are the epitome of morality.

Thanks. I’ll go look at it in greater detail.

You’ve gotta be kitten me.

Somebody had to do it

Politicians: “Hey Supreme Court, we’d like you to rule on the extent of your own powers.” (You can see where this was heading)

Court: “No worries…it’s that we get final say on interpreting what’s Constitutional.”

Politicians: “Eh? That can’t be right.”

Court: “Sure it is. It says so in the Constitution.”

Politicians: “But that’s just your interpretation.”

Court: “We refer you to our previous answer.”

Trump doesn’t need cute. He has his powerful handshake to impress everyone.

Some Warp-free kittens to keep the nightmares away: 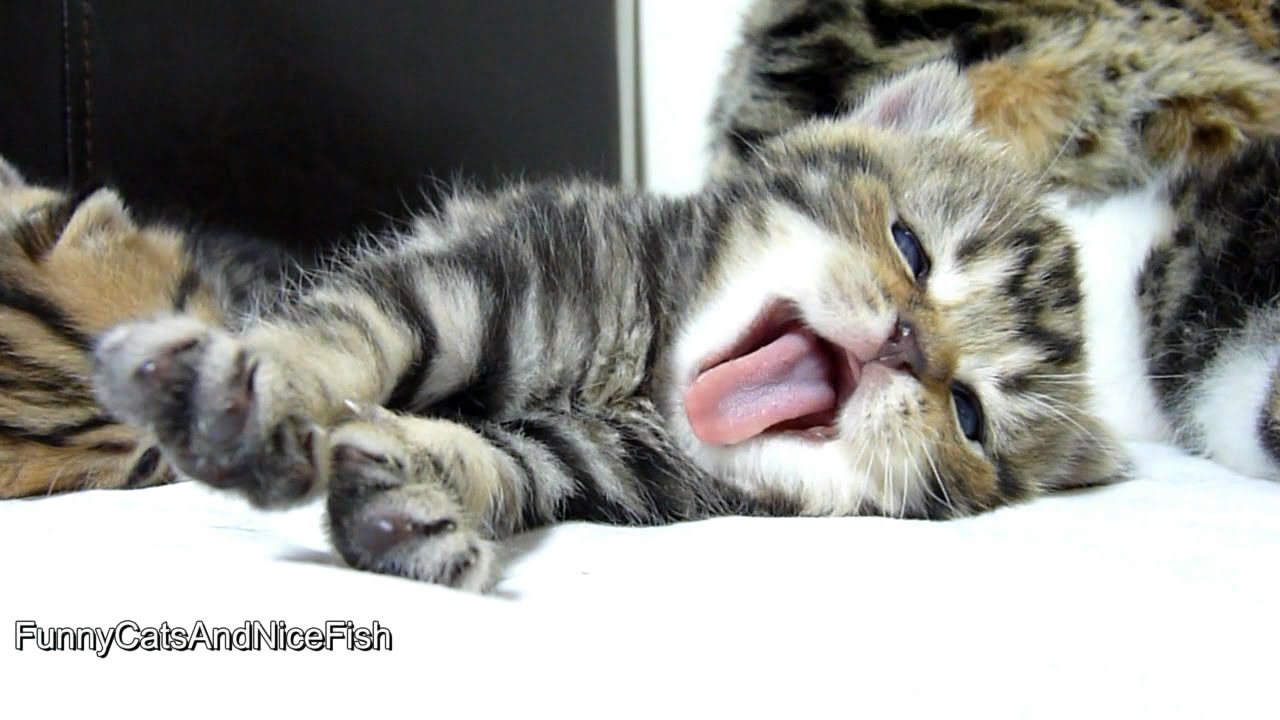 Hi, I was wondering if anyone knows of a good Anti Men’s Gripes Movement/Anti Men-Gone-Astray/Anti-misogynist blog? This anti-Trump blog is okay – I dislike Trump too, and there seems to be a anti-sexist article here every now and then, but It would be great if someone was out there fighting the good fight against the legions of sexist idiots who plague the internet.

I thought there was a blog like that, once…I remember really enjoying it. I hope it reappears someday, I really do. If nothing else, I’m sure there’s room for two blogs…

I’ve been seeing ads (I think mainly at Daily Kos) that picture Cheeto Benito (love that one!) as he would look bald with some grey hair ’round the ears with the caption “Trump hates this pic!” or some such. I looked it up on google and it’s actually a photoshop, but I think it does more to humanize him than anything else I’ve seen. Too bad it won’t change who he is.

Just been listening to Trump speaking at some Florida military base. He’s literally said that terrorist attacks are occurring all the time in Europe but “the dishonest media aren’t reporting them for their own reasons”.

ETA: listening on the radio

Another one for victorius parasol. Farage copping for an egg shower earlier today.(thanks to dalillama for the heads up) 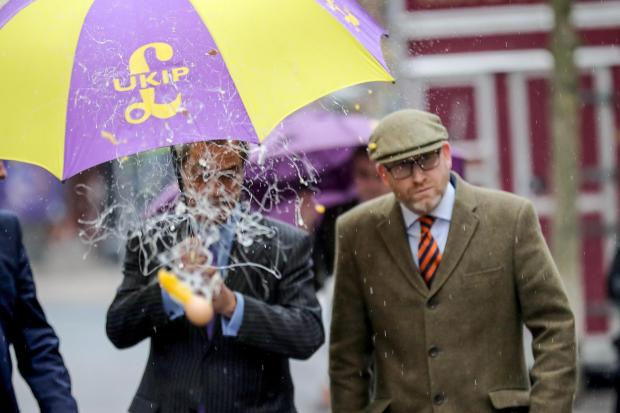 Well, cute kittens. Not a Trump supporter. But im not going to start insulting his appearance, its petty, immature and pointless.

A way to blow off steam, vent perhaps? David Futurelle, you put together this article? Great blog, but this was in bad taste, and just a lazy photo editing copy paste and sign off job. Articles like this make me just shake my head. You are a great writer, I understand every article will not be award worthy. But this is something my 16 year old daughter could craft.

Shame he had that umbrella deployed.

Yeah. Got him a bit though and it was a tricky shot. So I’d say 4.9 for style with a bit of an uplift for degree of difficulty.

Locksley, it’s true that I have focused a lot of my attention on Trump lately, largely because he poses a clear threat to (among other things) American democracy, the rights of Muslims and people of color generally, women’s rights.

But you must not be looking very hard if you don’t see the posts about misogyny and/or the manosphere. If you look over the past week, for example, you’ll find six such posts, not including the one I’m working on now. It’s true that my posts on famous (or at least internet-famous) misogynists sometimes feature issues other than misogyny, but that’s because so many of these people have moved into the “alt-right” and are now more likely to post racist crap than misogynistic crap.

There was a recent stretch during which I pretty much only posted Trump stuff, but that was in part because I was dealing with some health issues and found it hard to do more than one post a day.

I’m going to keep writing about misogyny, but the world has changed since I started this blog; MRAs/PUAs/”Red Pillers” are no longer the novelty they once were. Many of the people I used to write about have either lost their steam or moved towards the alt-right and/or Trump.

Also, I’ve done more than 2000 (literally 2055) posts dealing with misogyny since I started this blog, out of 3200 total. It’s getting harder to find weird misogynistic arguments that I haven’t already written about many times.

But there’s obviously still a lot of terrible and strange misogynistic stuff out there and I will continue to write about it. It’s just not going to be the only focus of the blog.

As for this particular post (and this is also directed at Concerned parent), if you don’t like posts like this one, skip them. I’ve been doing occasional off-topic posts since I started this blog. Sometimes they help to lighten the mood; sometimes they don’t seem to amuse anyone but me. But they don’t take long to do, and I do plan to keep doing them.

Davis, how dare you write about what YOU want to write about on your own blog?!! Talk about selfish . . .

I like the one where his mouth is an eye.

Poor Nigel. Which is the greater outrage? Who suffered more? Him? Or Roosh when he got a beer shampoo?

My big orange cat just gave me a look that says: Trump is ruining the good reputations of gingers everywhere.

Here’s one who can rock a hairpiece way better than Pol Pot Pie ever could.

Here’s one with nommable feet

and one with a nommable tail

Aheh. So, two newcomers show up out of the blue; the first one is all

Not a Trump supporter. But im not going to start insulting his appearance, its petty, immature and pointless.

Great blog, but this was in bad taste, and just a lazy photo editing copy paste and sign off job

Anyone who has read this blog a) knows that David mocks and ridicules the MRM fastidiously and b) does so by, generally, quoting the words they say. Anyone who reads this blog will also know that David doesn’t make fun of appearances all that much, and prefers to keep it above board.

Our two “guests” clearly have too much knowledge of what David does ’round here to be new, but don’t seem to know a) and b) from above. Hm. Selective memories, I guess.

David’s addressed this before, and it’s his damn blog. Assholes and chanlords love to point out hypocrisy in others, and will twist reality into knots to try to make accusations first appear, then stick. Lying about their identities and experiences, exaggerating their perceptions and conveniently forgetting facts; it’s all fair game in their quest to make themselves feel superior. Or, sorry, “both sides are equally bad.”

Dave, what made you think it was okay to do this to poor, sweet, innocent, little kittens?

If man could be crossed with the cat it would improve man, but it would deteriorate the cat.

I get that I’m basically pointlessly howling into the ether if that was a troll post, but…

One can easily, with much evidence, draw a straight line from the manosphere to gamergate to the rise of the “alt-right” and tr*mpism. Right after the election, I can’t even count how many people referred to gaming as “the canary in the coal mine.” Tr*mp and his fuckery are hardly irrelevant to the original purpose of WHTM.

@Scented Fucking Hard Chairs
Yeah, I was reminded of the little cyclops cat while looking at these, too.

For anyone who needs a laugh at Trumps expense you should check out the ‘every second counts’ collab of european late night shows. n More are still coming and some of them are really funny.

Am I the only one who thinks Drumpf’s rumored discomfort over Melissa McCarthy’s SNL portrayal of Spicer is hilarious? Even though the likely reasons for his discomfort (misogyny and probably also transphobia) are gross.

Thanks, folks. I do feel an obligation to readers and donors that would preclude me from, say, turning this blog into something completely different. But I think Trump is very much in WHTM’s wheelhouse, and I am committed to doing non-Trump-related misogyny takedowns.

We trust you, David.

The trolls can fuck off.