It’s been quite a week! Today’s #ResistTrump mission is easy as pie: Go to the White House web page and sign this petition demanding that Trump release his tax returns.

The text of the petition is short and sweet:

The unprecedented economic conflicts of this administration need to be visible to the American people, including any pertinent documentation which can reveal the foreign influences and financial interests which may put Donald Trump in conflict with the emoluments clause of the Constitution.

The petition, which has been up only one day, has already surpassed the 100,000 signatures necessary to require an official White House response — the total is now close to 150,000 — but the more people who sign, the better; it increases the chance for media coverage and helps to make clear just how deep the opposition to Trump really sis.

Oh, and give yourself a huge round of applause for all the activism you’ve done over the course of the last week!

Also, turn on MSNBC or some other cable network to see how HUGE the anti-Trump protests around the world have been today. As I write this, at 4 PM central time, the protests that started this morning are still going on in cities around the world.

We can win this thing!

Hey, there were a couple more Donald-related petitions to sign as well! Thanks for the link!

I’m legit surprised they haven’t been dug up and leaked, yet. I mean, I know the IRS is generally absolutely committed to the privacy concerns of their work, and they’re probably pretty paranoid about the time the Tea Party threw a giant hissy fit and slashed their budget, but…seriously, haven’t we passed the Godzilla Threshold yet?

It would be perfect if this leads to him going down like Al Capone.

Or maybe it’s a secret he’ll take to his grave. Seriously, how long have people been asking for the tax returns to be released?

Holy crap. When I signed that petition this morning there were only 51,000 signatures.

(Of course, it wouldn’t surprise me a bit if theTrump administration didn’t shut down the entire site.)

Redsilkphoenix: Jetpack Vixen, Agent of the FemiNest Collective; Keeper of a Hell Toupee

Quite a while ago (a month or so before the election) I posted a link here to an interview of one of Trump’s sons about why his dad wouldn’t release his taxes. The answer, slightly paraphrased, was “because people would be able to see them then.” Which…is/was the point of doing so? So the voters could tell see how well Trump handled his money?

If someone wants me to, I can see if I can relocate that link and repost it here.

Can he go to prison yet please? Pence too?

On another website, I noted that several commenters took a hands-off approach to Melania.

I understand that. After all, she doesn’t make policy.

OTOH, I’m not going to forget this:

Several weeks ago, Julia Ioffe wrote a long profile in GQ of Melania Trump, the woman who might be our next first lady. The Trump campaign, not to mention the Trump family (to the degree that there is any distinction between the two), was not pleased with the piece, and several Trump supporters let Ioffe know it. She was subjected to disgusting anti-Semitic attacks on social media and elsewhere and was even forced to file a police report.

OTOOH, I saw a photo of a sign at a Women’s March today that said “Melania: Blink twice if you need help.”

More about Melania: I don’t know how much control Melania has over her whitehouse.gov webpage. What I do know is that, unlike Michelle Obama’s webpage, it is poorly written and edited.

Melania Knavs began her modeling career at the age of sixteen. She would pursue a degree at the University of Ljubljana in Slovenia, but pause her studies to advance her modeling career in Milan and Paris before moving to New York in 1996. As a model, Melania has appeared in high profile ad campaigns and worked with some of the top photographers in the fashion industry, including blah, blah, blah.

So she “paused” her studies–and when did she resume them? Now that Donald occasionally has business in DC, maybe she and her Secret Service agents can take a few night classes.

In April, Melania will be 47. Yeah, she could have more children–but I’m going to go ahead and bet the farm that she won’t.

Mrs. Trump cares deeply about issues impacting women and children, and she has focused her platform as First Lady on the problem of cyber bullying among our youth.

Someone is trolling us. 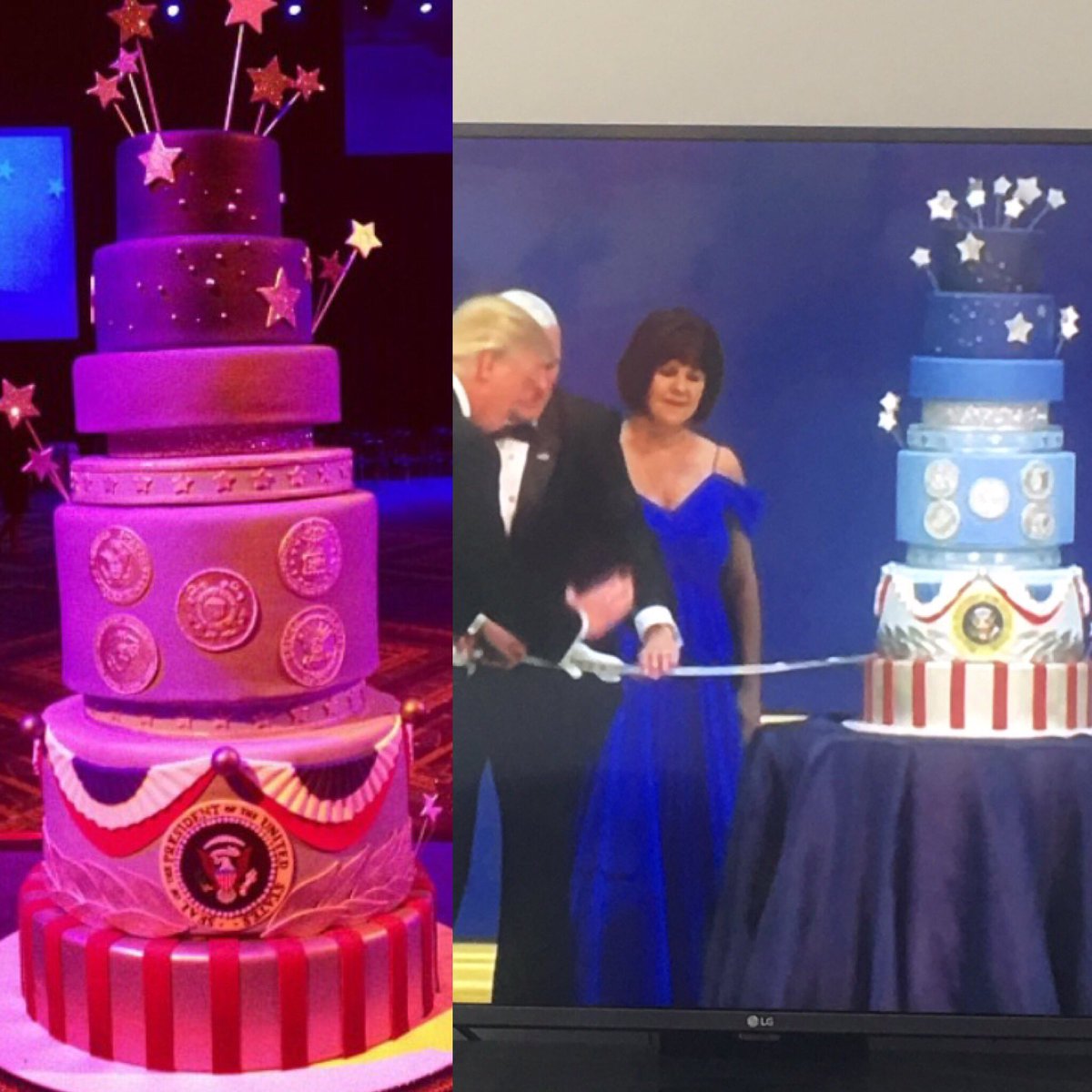 PS: Unlike Obama’s cake, most of Trump’s cake was Styrofoam.

I hope the bakery which, uh, assembled that “cake” got paid up front. If not, they’ll probably never see that money.

Also, sorry, but that design is ridiculous and hideous.

I hope the bakery which, uh, assembled that “cake” got paid up front.

They did, and they donated the proceeds to the Human Rights Campaign. They also give full credit to the designer of Obama’s cake.

211000 now. I don’t really see this prompting a release. He still has to respond tho. Or he scraps the whole thing, and decides he won’t respond. Which is still a response

Is Knauss the American version of Knavs? I’ve only ever seen her name as Melania Knauss.

I still find it hilarious that Mrs. Trump’s pet program focus is going to be cyber-bullying. She must be unaware of who she is married to.

They did, and they donated the proceeds to the Human Rights Campaign.

It’s a minor point, I suppose, but their Instagram says:

Best part is all the profits are being donated to @humanrightscampaign

I mean, Trump is so dishonest that he didn’t even pay the actors he hired to fake a crowd when he announced his run. The Guardian reported:

On a day when the size of Donald Trump’s inauguration crowds relative to Barack Obama’s is under scrutiny, an embarrassing reminder has emerged of the astroturf origins of the Trump campaign. The Federal Election Commission (FEC) has released a report by its general counsel on the campaign’s hiring of actors to enthuse at Trump’s candidacy announcement at Trump Tower in New York on 16 June 2015, revealing that the ersatz supporters had to wait four months to get paid for their cheering. The campaign committee only coughed up the $12,000 it owed to the casting company that hired the actors a month after a complaint was made to the FEC.

Interesting. I no longer have a registered login on whitehouse.gov . I guess they scrubbed all the users along with the climate data!

The biggest reason to ignore Melania Trump and let her stay in Trump Towers in obscurity for the next 4 years like she wants: google her images. The woman almost never smiles. She may have married into financial security, but she didn’t marry into happiness.

First Dog on the Moon has a cartoon about cake-gate. I particularly like the phrase “a series of enormous protruding lies”.