UPDATE 1/18/17: As of midday today, the number of congresspeople who are skipping the inauguration has reached 58. See here for a running tally.

Last week, Civil Rights legend and 16-term Congressman John Lewis made a bombshell announcement, declaring in an interview with NBC that he does not think Donald Trump was legitimately elected president. Because of this, he went on to say, he will not be attending the inauguration this Friday.

Lewis’ announcement — followed by Trump’s ignorant, racist Twitter denunciation of Lewis and his constituents —  has inspired numerous other Members of Congress to announce that they too will sit out Trump’s swearing-in. Before Lewis’ declared his intention, there were a handful of Congressional boycotters; now there are more than two dozen, and that number is likely to grow.

You can find a list of them on Fusion; the author of that piece, Wilfred Chan, has been keeping track of new additions on Twitter.

Please urge your representatives in Congress (House and Senate) to join the boycott! If they already have, please offer them your thanks.

See my posts here and here for information and advice on how to call/write your reps — from basic stuff on how to find their contact info as well as tips from former congressional staffers on how to make your calls and emails effective. And if making these sorts of calls is tough for you, here’s some advice on calling politicians if you have social anxiety.

While Congressional offices will be closed, due to a holiday honoring a man Lewis marched alongside, you can still contact many Members of Congress on Twitter. And definitely give support to those who already have announced, even if they aren’t your representatives. While politicians aren’t always thrilled to get feedback from people outside their states/districts, I can’t imagine anyone unhappy to get a “thank you” on Twitter.

Please also contact the White House to ask Obama and Biden to skip the inaugural as well. Probably a futile gesture but if either (or both) were to take this step it would  be monumental. Go here for information on how to write or call the President.

A co-worker n trumpling asked me today if I could “just beleeeeve” all the people protesting the dumpster’s election… (I would’a thought she’d have learned by now as much as I’ve said…) I countered that the folks protesting were mostly those whom he’d spent his entire campaign threatening to destroy.

She mentioned that nobody had protested Obama’s election…. I showed her pictures of the protests…. She mentioned that, at that time, “Obama hadn’t proved that he was born in the U.S.”…. I mentioned that no one had asked for the dumpster-fire’s birth certificate…. She replied… (wait for it…) “no, but he’s whi…” and trailed off…..

When was the last time Lewis wasn’t the subject of racist denunciations? Gotta do better than that to stop him!
http://images2.dailykos.com/i/user/6/Breach_of_Peace.jpg

My representative is Barbara Lee, and she is awesome.

Do you think Trump even knows who Lewis is? He didn’t even take the few minutes necessary to find out where Lewis represents: he just assumed “black guy, therefore crime-infested inner city”. Trump is so low-energy. Sad!

I hope the boycotts sting. I hope more people boycott the Unauguration, people from all stripes.

My rep is on the list. I’m a bit curious as to why there aren’t any Senators on there… I think I’ll ask mine. 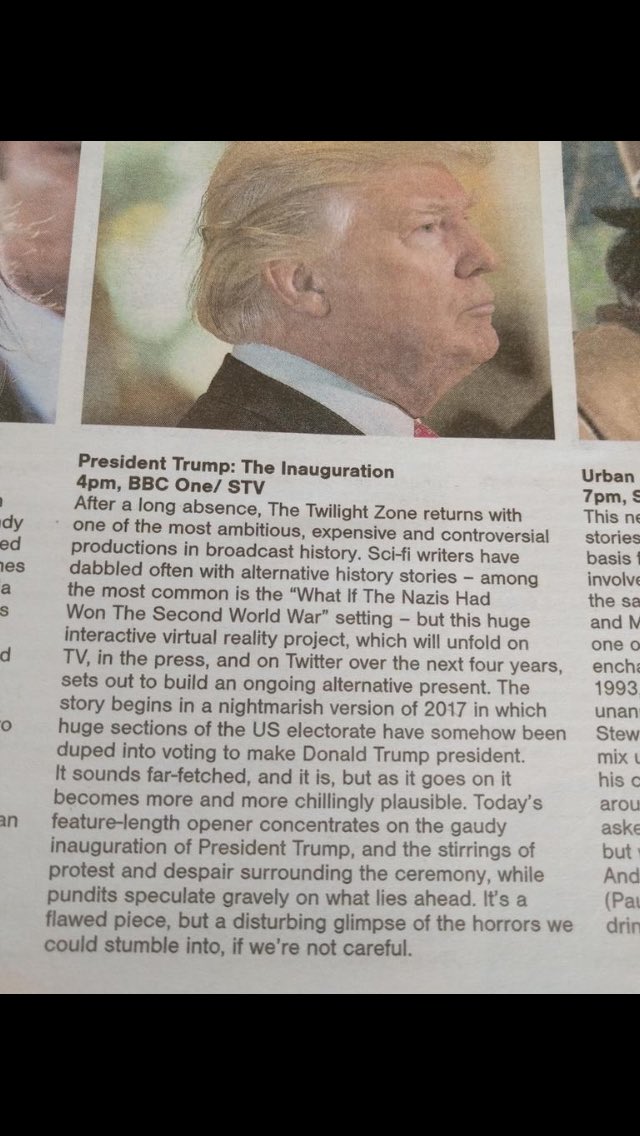 Please also contact the White House to ask Obama and Biden to skip the inaugural as well. Probably a futile gesture but if either (or both) were to take this step it would be monumental.

I mentioned that no one had asked for the dumpster-fire’s birth certificate….

My brother expressed his opinion ghat the protests are just an inconvenience for drivers trying to go about their day and that they don’t prove anything. I’m sorry if fighting for my rights and the rights of others is a slight inconvenience to your white, male ass.

#ResistTrump by urging members of Congress to vape during the inauguration

#ResistTrump by urging members of Congress to attend the inauguration in Halloween costumes, remind everyone that Trump decided the theme by attending in costume himself

I’m told on good authority that the Inaugural will be attended by the wandering spirit of Kurt Vonnegut, who will likely be seen as an airy mist hovering around Chief Justice John Roberts’ head, trying desperately to warn against making Howard W. Campbell, Jr. the President of the United States.

With special guest star 3 Doors Down!

On a side note, as the inauguration inches closer and the sad reality of this joker taking office gets clearer… I always have this bizarre vision of his Hall of Presidents animatronic double addressing the guests of Disney World.

Seriously, how are they going to pull that off? A morbidly curious part of my wants to go to Orlando just to see it… but then I’d have to go to Florida….

Does anyone else feel like there are few adults getting ready to govern America? The GOP and Trump,seem like errant, evil fourth graders.

I read a tumblr post with an idea of how to sort of boycott the inauguration via TV ratings: make it have a lower viewer percentage by having the TV be on at a different channel. They suggested things like the Science channel or Comedy Central. I may leave it on Cartoon Network with the volume turned all the way down since I’ll probably be at work during the time.

Do you think Trump even knows who Lewis is? He didn’t even take the few minutes necessary to find out where Lewis represents: he just assumed “black guy, therefore crime-infested inner city”. Trump is so low-energy. Sad!

Moggie, you are my new favourite person.

That is a work of art. Bless whoever wrote it.

Nah, not this one for me. My congressional rep will be there and celebrating, dancing to the music of…well, whoever they manage to dig up and the internal soundtrack of internalised misogyny and hatred.

My non-American support to anyone who can convince another politician not to support this incipient trainwreck.

The Bacongineer (Polish Friend from across the Pond)

Good luck out there

@Scildfreja: I do sometimes catch myself wondering when Rod Serling is going to show up and start hammering home the irony.

I made a Tumblr post asking Ashton Kutcher pretty, pretty please to rip off his Trump mask and start laughing at us, but that was a while ago.

Does anyone else feel like there are few adults getting ready to govern America? The GOP and Trump,seem like errant, evil fourth graders.

Fourth graders are waaaay smarter than these animated buckets of slime.

I made a Tumblr post asking Ashton Kutcher pretty, pretty please to rip off his Trump mask and start laughing at us, but that was a while ago.

I seem to have a mental block: I keep mixing up Ashton Kutcher and Jared Kushner. Can’t seem to stop doing this. So, when I’m reading the news these days, I’m all “wait, what? Oh, right”.

Is double-schadenfreude a thing? Because I think I’m experiencing it right now.

kupo, so one guy has found he’s unable to sell tickets which are available elsewhere for free?

@Moggie
Basically, yes. I think he was expecting that a lot of people would snatch them up, creating a market for scalpers to sell them. But apparently they’re not that popular.

kupo, I want to believe that the inauguration will have more tumbleweed than audience, but that’s a very thin article. It has one guy, an occasional scalper, trying to sell two tickets. Not much to hang a story on.

I was more amused by the article linked from there, where Trump said that “dress shops” are sold out:

“We are going to have an unbelievable, perhaps record-setting turnout for the inauguration, and there will be plenty of movie and entertainment stars,” Trump told the Times. “All the dress shops are sold out in Washington. It’s hard to find a great dress for this inauguration.”

Which… turns out not to be true.

Firstly: it continues to amaze me that he lies so continuously, so transparently, and so needlessly.

Secondly: isn’t he supposed to have more important shit to concern him? It’s just a show! I don’t recall past presidents being this needy about how many slebs would show up, and what frocks they’d wear. He has people to worry about that for him now.

@Moggie
It’s not a serous news site or anything. They report on geekdom with a feminist slant. Sometimes their articles are serious but they’re mostly fun. It’s an article about a funny thing that happened. *shrug*

Why should anybody be surprised or shocked that the Angry Cheeto has said Yet Another Blatantly False Thing Whose Falsity Can Be Revealed In Five Seconds Of Googling?

Look: Trump is a bullshitter—a con artist. He doesn’t care about ‘truth’ or ‘falsehood’. He says whatever he thinks will get people to react/behave the way he wants them to react/behave. I’m unsure if the Cheeto is actively opposed to speaking the truth (regards truth as a reason to not say something), but at this point it’s perfectly clear that the Cheeto does not regard falsity as a reason to not say something.

@Cubist
Because he’ll be president in 3 days. We should not normalize this behavior by just shrugging and saying, “Donald will be Donald.” For the same reason we shouldn’t say, “boys will be boys,” too. That normalizes the behavior. It lets him off the hook. We can’t afford to let that happen. It wasn’t okay the first time and it’s sure as hell not okay now.

Nobody here is surprised. We’re objecting to it and will continue to object to it. It’s not like he’s that annoying acquaintance in your social circle who has a habit of stretching the truth for attention where you can just smile and nod and roll your eyes behind their back and it doesn’t make a difference to your life. His lies can and will do real harm.

Also it’s a good political strategy for the left to oppose Donald strongly because we need to be able to have the moral high ground and be proven right when the presidency inevitably fails and fails hard.