On CNN, Brit journalist Rob Crilly makes the case for mocking Trump mercilessly. In a post titled “It’s your duty to laugh at Donald Trump,” Crilly notes that

He is utterly impervious to the usual weapons of politics. Try to wound him with shame or embarrass him with public scrutiny and you may as well try to sink a duck by pouring a jug of H2O over its rear end.

But, Crilly notes, if you make a comment about his allegedly tiny hands (not that there’s anything actually wrong with tiny hands) Trump will lose it completely. And each time Alex Baldwin puts on orange makeup and a wig for Saturday Night Live, Trump watches the show and seethes.

Trump’s sensitivity is easily understood when you realize he is on a desperate quest to be taken seriously. Just remember the face he pulled when he sat beside Barack Obama in the Oval Office on that Thursday after an election. It was the sort of face a three-year-old exhibits when they really, really want you know they are concentrating. Or when they are trying to squeeze out a number two.

It is not a sign that you have given up, that you are complacent or one of the winners. When you remember that all Trump craves is to be taken seriously, it turns out that laughing is your duty.

Humor has always been an effective tool against tyrants. And the utterly humorless Trump hates being mocked more than almost anyone in the world.

So make Trump jokes. Post dumb Trump memes. Never give him the respect he so desperately craves but does not deserve. It’ll make you feel better and Trump feel worse. Seriously.

Not only is humour an effective weapon in the arsenal against tyranny, but it also helps keep the joke-maker’s spirits up. It is a sign that they have not been beaten. That their will has barely been damaged. To those who think the alt-reich cannot be harmed by humour because they sometimes laugh at themselves: Their humour is very shallow and crude. They are actually incredibly thin-skinned, as bigots usually are. Just don’t sink to their level of humour.

We don’t need to hear those things, just like I don’t need to sit through those BORING daily security briefings, just the same thing over and over again. Doing boring things is what I’ve got Mike Pence for. We don’t need to hear boring so-called “facts” from people who think they know better than us, amirite? They don’t know better, I’m the smartest, I can figure it all out. I’m smart enough and you’re smart enough to know what really happened without people with their one-sided agendas reporting their one-sided “facts”. They are just sore losers, sore that fiction won over fact. SAD!”

Not quite on topic but AHAHAHAHA:
Trump fans’ ‘Deploraball’ party descends into chaotic infighting over Nazi salutes and book burnings

@Nequam:
Thank you for linking that. My sides, my sides. I’m laughing too hard to sit still.

I first saw this years ago but it seems relevant now. 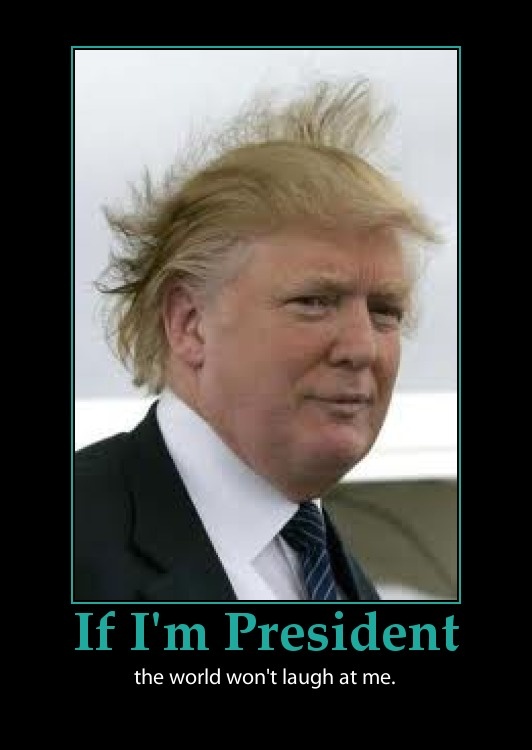 Hair is technically part of the body but I don’t think most would mind that part of him being mocked. 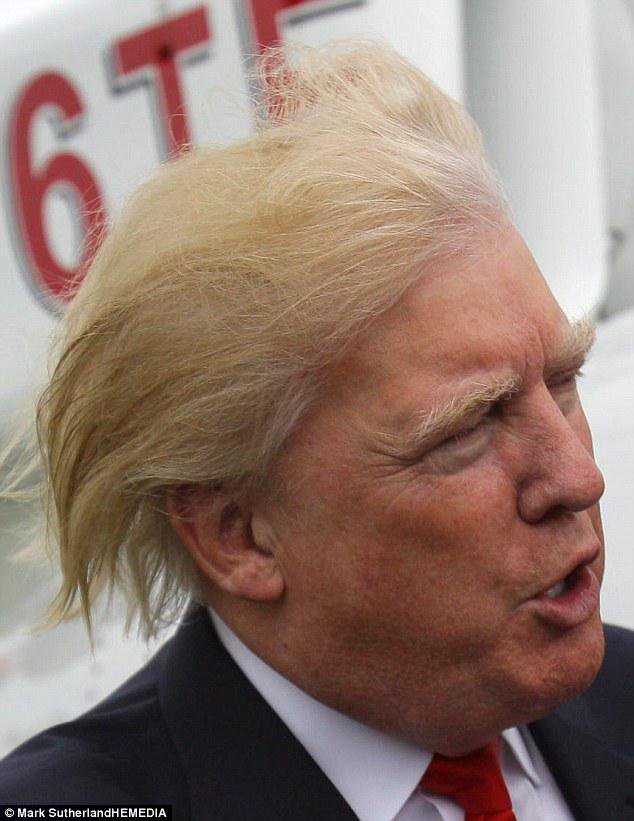 I’m pretty comfortable about mocking his tiny paws and by implication his penis size, because he’s the one who put them on the table (thank murgatroyd not literally). And plan to spend part of the next few years photoshopping his face onto pictures of soft-serve icecream cones. You can see the resemblance – matt orange base, elaborate swirly fluffy puffed-up-yet-empty confection on top.

Did you see how weirdly disproportionately tiny his ickle wickle fisty-wisty was on the Xmas card? Is it really that small, or is the graphic designer messing with him?

That story is beautiful. Thanks, Nequam!

@Sinkable John – Yeah, I looked in at Donald Trump’s Twitter for the first time in a while, thinking there’d be grammar and word choice problems to pick apart. There were a few, but the content was definitely the most painful!

@BritterSweet – “Hell toupee” – this amused me too much 🙂

@EverythingIsRidiculous – re the Xmas pic: I thought the gesture itself was weird. Raised fist for motivation/encouragement/”go get ’em” – sure. But for a holiday greeting?!

that really tickled me for some reason.

The upshot: The Tweeting Tyrant sent out a Hanukkah message and his alt-wrong fans are losing their shitty minds over it. “Wtf I hate trump now” (an exact quote)

I’m pretty comfortable about mocking his tiny paws and by implication his penis size, because he’s the one who put them on the table

If you were talking about people doing this to his face in private, or in personal correspondence, I might think about agreeing. But when you’re talking about memes and internet comments intended for mass consumption, the impact goes beyond mocking trump.

Bodyshaming of any sort implies that there’s something shameful about certain types of bodies, and that’s not okay. Trump making a big deal about penis size does not make penis size a mockable topic. He didn’t “put it on the table”. He put his insecurity on the table. That’s fair game. The fragility of his masculinity is fair game. And so are a million other things you can mock about him that have nothing to do with his body. But don’t make the fight against trump harmful to people who have no reason to feel bad about their bodies, and have no say in the sorts of things trump is insecure about.

My interpretation of the weird fist-pump gesture on the Xmas pic is that the whole card isn’t designed to be a holiday goodwill greeting, but an exclusive EFF YOU to anyone who celebrates anything other than Xmas or who says Happy Holidays. Propaganda for the fictitious War on Xmas.

@Hambeast:
Hah! Did they not know of Trump’s Jewish links? Are the neo-Nazis only just now discovering that their Mango Mussolini has Jewish family?

Easiest reference point on Carrie Fisher is Princess Leia. But she wrote a poignant story about addiction and staring down demons.

That’s the bottom line…. If I’m mocking someone for some characteristic, I’m making THAT CHARACTERISTIC a negative association, and not just for the person I’m mocking.

Appearance wise the bizarre orange racoon thing he has going on is completely his own fault.

The whole tiny hand/penis thing is trickier but I think there is a lot of potential there if done right:
“Bragging abut his penis size on national television just means he does not know how to use his tongue.”
That one can be interpreted in multiple ways like he is bad at oral (arguments).

he does not know how to use his tongue.

Apologies if we’ve already covered this and it was rejected for good reason, but I’m a regular reader and don’t remember seeing it.

Trump is British slang for fart. It’s quite a polite euphemism; one could imagine the Queen trumping (except of course Her Majesty never would, perhaps one of the corgis…).

I would hesitate to mention it if that was actually his family name, with bucket loads of cultural meaning. But as the excellent John Oliver pointed out, it isn’t. And he’s made it his sodding brand, without a Google search first.

Did I miss a conversation? Or have all the Brits here been too polite to mention it?

I remember the trump = fart thing being mentioned closer to the beginning of the year. Pretty sure it was here, but it could have been in one of the Patheos Atheist blog comments sections, I guess.

Unrelated to the sack of prolapsed arseholes but related to clowns: Is it just me, or does the rebooted Pennywise look like a cheetah cub?

WE ALL FLOOF DOWN HERE.

@Weird (so, the president-elect was running a long con after all, SURPRISED?) Eddie

However you interpret it is valid but thats my favorite.

We can mock the evil emperor all we want, very shortly, it’s his lieutenants who will need to be watched. They will not be as ridiculous, and they will be far more dangerous.

Seeing as the NY authorities are not going to let him sidle sideways out the door before they’ve properly considered the various nefarious goings on in his so-called charitable foundation – I reckon reviving the original reference to fingers being too short to reach the bottom of a rich man’s pockets is worth a try.

Being called a “short-fingered vulgarian” has a lot more oomph when there are continuing revelations about the scummy underhanded goings on with the money in that foundation.

Long pockets, short fingers, is well-known around the world in various languages and aphorisms about the stingy selfish rich.

There are people on the alt-right only now discovering that Cernovich has, um, questionable views on women. They are shocked, and also horrified. It’s revolting and amusing at the same time.

Trump is British slang for fart.

Also, Putin (or pootin’) is Southern U.S. slang for flatulence.

If I were an alt-right candidate, and wanted to win, I’d change my name to Breakwind or One-Cheek Sneak.

There are people on the alt-right only now discovering that Cernovich has, um, questionable views on women. They are shocked, and also horrified. It’s revolting and amusing at the same time.

Why, it’s almost like white supremacists are bigots, or something.

Best I could do.