I got on a bit of a 90s kick last night, so here’s the Spotify playlist that came from it, a kind of 90s alt-rock-chick greatest hits mixtape. So enjoy, if you’re into this kind of thing!

Ironically, my 90s binge was inspired by a band that’s not on the mixtape, because they’re not on Spotify: Cake Like, a band fronted by Kerri Kenney, perhaps better known for playing the somewhat off-kilter Deputy Trudy Wiegel on Reno 911. Poking around on Youtube, I had found some episodes of Viva Variety, the extremely odd and rather short-lived variety show parody show she did with Thomas Lennon, who also went on to greater fame on Reno 911.

So that led me to some Cake Like videos. The friend I showed them to was not impressed. But hey, I like them, and maybe some of you will too.

(In case you’re wondering, I’m still off-duty, and probably will be over the long weekend as well; I may post some more off-topic stuff before I officially return.)

Anyway, that idiocy aside.

Even though I don’t have any interest in the Vocaloids themselves, I love the virtual concert tech they inspired. Fuck knows I’d give my left kidney to go to a Squid Sisters concert.

(Of course, I’d buy a rock with “SPLATOON” written on it in Sharpie…)

I unironically love Dragon Ball Z and nuts to anyone who tries to impugn my taste over it. Like, to be fair it’s actually pretty intolerable to watch unedited, but my nostalgia will not be shaken.

I actually liked the manga when I was younger, but the anime I found almost impossible to watch due to the slow pace.

70s reggae is too slow for me. I respect it, but I’ve accepted it’s just not my thing. I like ska from the 50s and such, but other than that I’m all about the dancehall era starting in 1978 or so, and digital from 1985 and on. I like modern roots revival much much better than the 70s stuff. Just let me know if you want links to non-risque modern dancehall. It exists, but you’re right that most of the music is very sexually explicit and often graphically violent.

It’s just unbearable at times (most times). A kamehameha takes half an episode to complete. It’s like KAAAAAAA! then separate shots of 20 different characters’ faces, then MEEEEEEEE! then 20 faces again, then HAAAAAA!. My god, what were they thinking. I found myself watching episodes at 4x speed just to get through them.

You seen the Father Ted episode where Father “worse than Hitler” Stack insist on playing Cutty Ranks at three o’clock in the morning?

If not check it out.

When I was watching the show was essentially right when Funimation was beginning to translate it, so the anticipation for new episodes made the slow pacing hardly noticeable. That combined with a constant search to find subbed content online *horrific flashback to realmedia videos* and a couple bootlegs from a friend who had been to Japan made me a bit of a superfan for a time.

I didn’t even read the manga until I was in my 20s, but do agree that it’s a much better property. Also DBZ Abridged is amazing.

I hadn’t heard of that show before, actually. Cutty Ranks is such a random reference. Not really an artist that gets much recognition, but I think he had some success in the UK in the 90s so it might make sense.

I read the manga as a young teen and only saw the anime in my 20s, downloaded as a torrent file all episodes at once. I had to skip many episodes which contained almost no content, and even though I couldn’t make it through the whole thing. I was actually thinking about how horrible it would be to wait a week for a new episode, only to realize nothing happened in the new episode either. :p

I remember when the first version of Vocaloid came out, it was called ‘Miriam’ as it featured the voice of Miriam Stockley, a session singer who sang back up on most of Stock Aitken and Waterman’s records, and a well received Renault commercial. It’s funny how popular it got in Japan and turned into something way different.

@Cupcakes
I was just discussing that with a coworker the other day. One of the reasons they’re so popular in Japan is the relatively low number of phonems used in the language. There are roughly 50 of them, and that makes it easy to make synthetic lyrics sound closer to the way a human would say the words. I’m sure there are other factors as well.

50 phonems is significantly under-counting; that’s close to the number of characters on the charts but there’s diacritical marks for voiced vs. voiceless consonants and a number of combination characters, and two vowels in a row aren’t exactly pronounced independently. Still, the recording sessions to generate the Japanese voicebanks are considerably shorter than the ones for the English voicebanks.

Making it sound like a human is mostly down to fiddling with tuning parameters, since the voicebanks are recorded by having a human sing all the phonems.

There’s a Twitter hashtag trending–#IStandWithHateSpeech–that’s turning into a who’s who of Drumpf supporters, white nationalists, channers, and every other unsavory character covered by this blog. It might have been started in support of an absolute view of free speech in light of Facebook, Twitter, and Google moving more in line with the EU’s hate speech laws, but it’s been hijacked by alt-righters for their own purpose. I saw people foaming at the mouth about cultural Marxism, “PC culture,” and anti-Semitic talking points in the few minutes that I spent watching the feed before I clicked away. On the (slightly) bright side, Twitter was autofilling “#IStandWithLoveSpeech” when you tried plugging the hashtag in; a few reactionaries were upset that Twitter was trying to censor them.

Sorry to disrupt the conversation.

It’s weirdly refreshing when they’re so honest, you know? “I stand with hate speech! I’m anti social justice!” I probably wouldn’t be so straightforward about my pro-hate and anti-justice positions.

Sorry for my outburst, but I’ve had some really disgusting interactions with that subculture.

Anyway, has anybody heard about the Sargon stuff that’s going on?
Apparently he threatened/harrassed a member of parliament who talked about it on the BBC.
Could he have gone too far at last?

Very well, I will not comment on the subject any further in the future.

You might enjoy ‘Father Ted’; it is very funny. There’s also an episode where the priests are introduced to feminism.

“Clit Power”? I wonder what that means? I knew a Father *Clint* Power. Maybe she’s having a go at him? 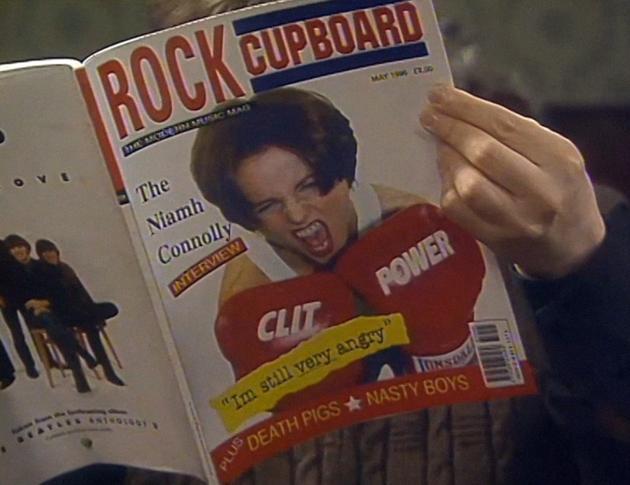 When you get back on topic here’s something showing Australian politics can do ridiculous misogyny and bigotry with the best of them: right wing senator tweets link to Roosh article.

Fuckin’ Nazi hatemongers have taken our hugs from us.

tl;dr is, putting more than one set of parentheses symbolizes a hug, and is widely used around these parts; but it’s also used by neo-Nazis to identify Jewish people, since someone came up with the idea on a podcast in 2014.

Seconding the recommendation for Father Ted, it’s hilarious. There’s an unfortunate little story associated with it as well: Dermot Morgan made sure the contract stipulated that there would only be three seasons of the show, so he could move on to other work and not spend his whole career as ‘the guy who plays Father Ted’. At the wrap party the day after they finished shooting, he died of a heart attack, leaving him remembered forever as the guy who played Father Ted.

Want to add some more female artists from the 90s who rock:

Jen Trynin: , whose battles with the music industry are well-documented in her biography, “All I’m Cracked Up to Be” – record company execs travel to see her on tour in private jets and stay in 5-star hotels using Trynin’s royalties, while she and her band stay in cheap motels with bloodstains on the sheets.

Whoops, sorry David, I didn’t see that you already had Down By the Water in your playlist. Nice to see Sleater-Kinney represented too.