Good day for a barbeque. Or a nap.

Wait a minute, I don’t think those are cats.

LOL!!!!! How the hell did that cat get in there?!?! Adorable. The barbecue looks kinda gross, though. o.O I think that cat is going to need a bath! Anyway. Yay, wombats!

Dave’s pic of the four cats on and around the picnic bench?

~one of these things is not like the other~

Yes, the orange kitteh definitely looks out of place.

As for the cat in the barbecue. LOLNESS! how did it get in there? Adorable! The barbecue looks kinda gross, though. O.o I think the cat will be needing a bath!

“Wait a minute, I don’t think those are cats.” YAY! Wombats! I love wombats. 😀

Lady Mondegreen-And I’m pretty sure that one cat is actually a skunk! O.O

ha, I didn’t even notice the infiltrator in that one.

Sorry, for the double post everyone. It didn’t show up the first time.

Now I now why that ginger cat is giving it such a dirty look! It is not a cat at all. 🙂

David-Racoons and cats together! The adorableness is just too much! *dies of cuteness overload*

Lady Mondegreen-And I’m pretty sure that one cat is actually a skunk!

Lady Mondegreen-LOL! Maybe it is Pepe Le Pew and he has fallen in love with one of the cats. XD

RE: Raccoon & cat picnic.
Those are some plump raccoons.
I’ve had them in my house (obviously different ones than in Dave’s picture, ha ha). They came in thru the cat door. They really didn’t seem all that afraid of humans…the had to be STRONGLY ENCOURAGED to leave:)

Several summers ago, the neighborhood raccoons discovered our aboveground pool. We (temporarily) became a major stopping point on the local perambulation until we got a secure pool cover. They certainly sounded like they were having a whee of a time out there, in the wee small hours.

RoscoeTCat-Oh dear! I hope they didn’t cause too much mess. ^^; Australia has a similar problem with bush turkeys. They are becoming a bit of a pest now that their numbers are increasing and if they get into the house and literally ransack the place. 😀

I had to work today (I’m on break right now), but it’s been a surprisingly slow day and I’m getting time and a half, so it’s all good. Plus, I had my 70 day review today, and my boss had nothing but nice things to say about me, and my dad’s bringing me home a pretzel from the baseball game he’s at. I don’t much care for baseball, but ballpark pretzels are the bomb.

childrenofthebroccoli-That’s awesome! Congrats on receiving such a positive review. 😀 Enjoy your pretzel, too! 😛 You deserve it.

Childrenofthebroccoli
Yay on your positive review! And yay for Pretzels!

In other news, my chihuahuas are under my bed because of the fireworks and one of them is now panting, staring at me and whining. Poor thing.

Thanks guys! And yes, the pretzel was delicious.

My son’s birthday today. Poor kid can’t have a proper birthday party on the day of, due to all his friends being out of town camping and stuff. We went out for a good burger though, and he got a free chocolate molten lava cake at the restaurant. At least he was able to have some fun with friends yesterday.

In other news: went fishing the other day with the hubby (something we love to do together). On two separate occasions, some strange guy would come up to us and start giving unsolicited advice about fishing, and how that day wasn’t a good day for fly fishing, how we needed to be careful wading, blah blah blah. Now, understand, my husband is about as expert as it gets when it comes to trout fishing–could be called “the trout whisperer.” So, all that advice that he graciously said “thank you,” to (his level of tolerance for that crap is higher than mine) was very unsolicited.

This is a prime example of “Fisher-mansplaining”

My dad’s dog freaked out at the fireworks too. She barked at them quite a bit. Now she’s all passed out exhausted from her hard work.

I found a pink California glowworm tonight. o3o I saw it yesterday but I got to see it again today, so, awesome.

They’re one of nature’s fireworks.

I got to try horchata for the first time today. It tastes like cold liquid cinnamon buns! *0*

I also had BBQ ribs, corn on the cob, and my uncle got my mom’s recipe for ambrosia fruit salad.

Grandma also made potato salad, but she put pickle relish in it, so I passed on that. : I 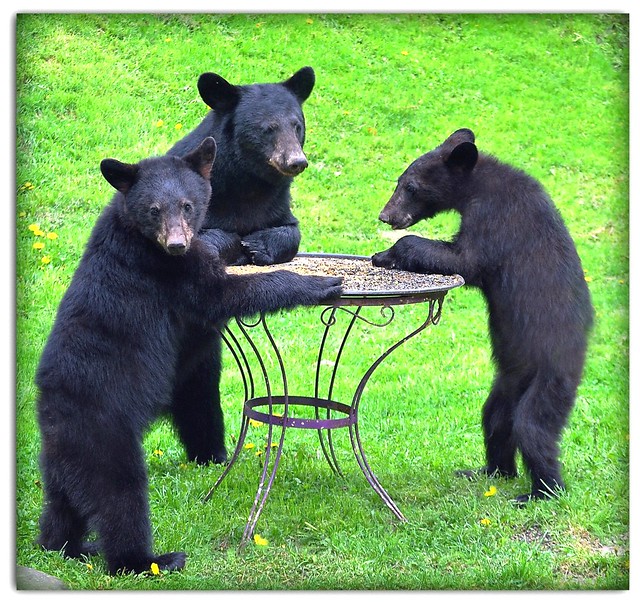 So the last couple days have been working at the new job and I won’t lie, I like it. 😀 It’s active but not too stressed out, the customers are chill, the staff are very friendly and VERY encouraging, and it’s not hard to get into a good mood. The shifts are kind of unusual (a full day is 10am-3.30 then 5.30 until 10/10.30pm, but half days are either one of those shifts) but I’m happy with that. Like I said before, I don’t plan to do it forever, but it’s a good job for now.

sunnysombrera-I am so glad your new job is going well! My new job is going well, too! Even though I am still getting over the new job nerves. I haven’t been fully employed for almost 2 years, so it is a lot to get used to. I get really stressed about not being perfect that I keep making many stupid little errors, which stress me out even more. What makes it worse is that the guys expect me to know everything and where everything is (I work in a small but extremely disorganized warehouse) by now, even though I only been working there for a few of weeks. They even expect me to know the dimensions of all the boxes. I get told off for picking up the tape measure to measure them. ANNOYING! I am a fast learner, but it seems like they want me to know everything instantly. Oh well. I just need to not stress myself so much and I will be fine. 🙂

misseb – Sorry to hear they seem to be demanding perfection from you. I guess my best (unsolicited) advice is to keep telling them what youve said here ie. you haven’t quite got things memorised but you quickly will, and you’ll pick it up faster if they help by just letting you learn.

I don’t have the same stress luckily but then there is a lot to learn with my job (bar, diner, booksales, presenting, front of house etc) so for me to know everything in a few weeks is unrealistic.

I don’t have any pictures of cats, but I do have a video about Bald Eagles. Enjoy learning something about our national bird. Also, the rest of you can grill; I’ll bring drinks.

*bounces around happily*
My computer stopped working, but the computer shop fixed it.
Then I couldn’t get the monitor re-connected but a friend fixed that (with a sharp knife to straighten bent pins)
SO I am online again!!
I talk to people online, even people who are friends in meatspace, since I am pretty much a hermit, so it is WONDERFUL to be in contact again!

Well I spent my fourth totally hammered because I had no fireworks. So all in all a good day.

sunnysombrera-Thank you. ???? I will definitely take your advice if they keep behaving that way. I think it is because they have been working there for so long, over 10 years for some of them, that they have completely lost the ability to empathise with new employees. They seem to have forgotten how disorganized and how illogical the set up is. It is actually very hard for a new person to find anything. They remarked that I am doing much better than they did they first started, perhaps they need reminding of that? Fortunately my boss seems much more understanding and warned me that the first few weeks would be difficult and seems to be satisfied with my work. I am just worried about receiving unjustly negative reports from my colleagues.

Elliot Rodger Was A Terrorist

I think Donald Trump is a neoreactionary, although he might not be aware the term exists.

He admires dictators (http://www.thedailybeast.com/articles/2015/06/18/these-are-the-dictators-donald-trump-loves.html) and says that as president he’d have chummy relationships with them.

He prefers women who are much younger than he is (“if she weren’t my daughter, I’d probably be dating her”), in true Redpiller fashion. He also seems to prefer Eastern European women. His beauty contests are all about determining women’s SMV.

He’s a racist (or at the very least, an anti-Hispanic xenophobe). He doesn’t seem to care whether people think he’s racist or not, which is why he didn’t apologize for his comments about Mexicans. He doesn’t give a fig for political correctness.

He’s super-wealthy and seems to think himself innately superior to all of us peasants. The guy has a king-sized ego, fit for an actual king.

The whole premise of “The Apprentice” revolves around being hand-picked to a leadership position by an even more powerful leader, rather than by being democratically elected.

*peers around for Aussies*

Um… Lisa? Can I have some context? Because even if it’s an open thread, being all “People who follow religion X are Z and by the way if you believe Q you have to believe R” is kind of sort of…

… I dunno the right word to use, there. It just strikes me as a little odd. If there’s a particular reason it’s bugging you, like a recent news thing or a recent experience with a particular person unloading some jerk behavior and doing the whole “BUT THE NEW TESTAMENT IS ALL NICE” handwaving, that’s one thing. I’m pretty sure we’d be down for discussing that if that’s what you want.

I’d really rather not start an atheistic posters vs. religious posters thread war, though.

Sorry, I was just venting because of what some jerk said to me (not here, offline). Don’t want to start anything. And the “I don’t know, but” part wasn’t supposed to be part of my post. We can drop the subject.

On a happier note, have you heard about the pro-LGB decision the EEOC made, that sexual orientation is covered under employment discrimination law?

I hadn’t heard, because I don’t have TV to watch news and I don’t google news half as often as I really should…