So I was idly perusing Janet “JudgyBitch” Bloomfield’s Twitter yesterday, and I came across an alarming tweet. It seemed as though Bloomfield had somehow penetrated the 47 levels of security protecting the Feminist HIgh Council to discover incontrovertible evidence of Operation Wicked Succubus. You know, the feminist plan to eliminate all men (except for me).

Her followers were aghast: 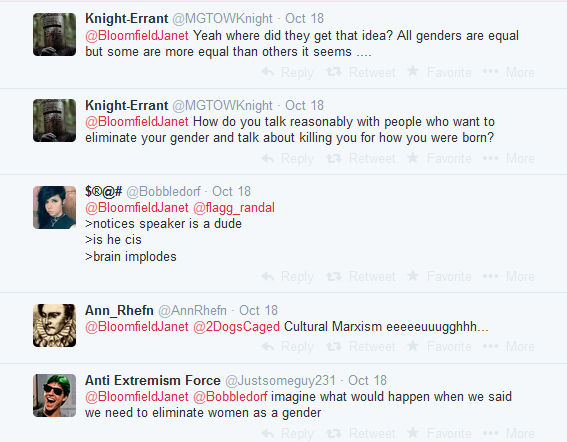 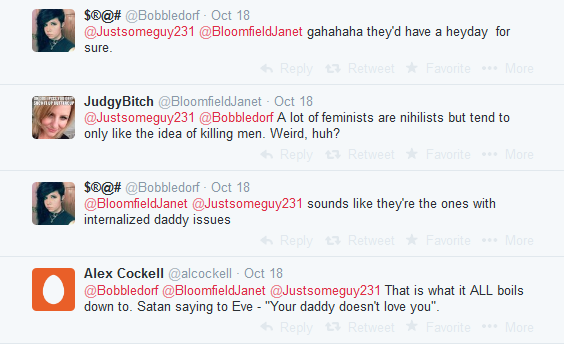 And naturally one of them brought up #GamerGate.

There were a few others, but you get the idea.

It never occurred to any of them to, you know, try to find out just who the bald man advocating killing all men was. Or who exactly he was talking to.

So I decided to do some serious investigative journalism to see what I could uncover. I typed out “‘eliminate men as a gender’ security” into a little known internet “search engine” called Google, and boldly clicked on the first result.

This led me to a Tweet with a URL in it. Bravely, I clicked on that URL and found myself looking at a video of a presentation at something called Monitorama PDX 2014 — clearly the code name for one of the Feminist Conspiracy’s conventions.

I looked it up in Google and discovered a web page for the event, which had been held in May. It was described as an “An Open Source Monitoring Conference & Hackathon.”

And then I decided to look up the name of the speaker: James Mickens. Turns out the guy works at Microsoft, one of the companies at the center of the Misandrist Conspiracy. Mickens is also the author of a number of papers, with titles like “Pivot: Fast, Synchronous Mashup Isolation Using Generator Chains” and “Mugshot: Deterministic Capture and Replay for JavaScript Applications.”

Then I decided to watch the video. And I was shocked!

Because it wasn’t a speech about killing all men after all. It wasn’t even a feminist speech. No, it seemed instead to be a highly technical talk about internet security issues, illustrated with a lot of silly slides. Like this: 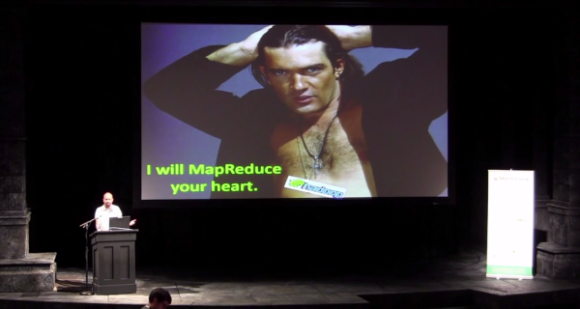 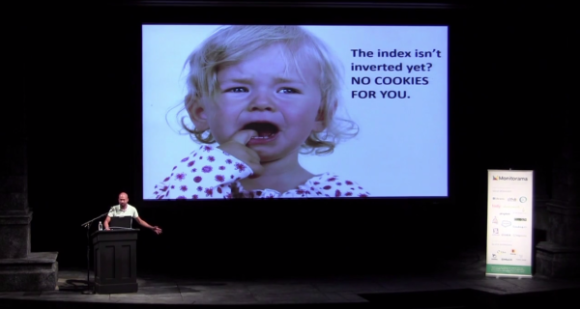 I must confess that I didn’t get the overwhelming majority of his jokes. But he audience seemed to find these slides, and much of what he said, hilarious. So if you ever need to hire a comedian who can joke about Synchronous Mashup Isolation Using Generator Chains, Mickens is your guy.

So where does the whole “kill all men” thing come from?

Well, I skipped ahead a bit in the video until I found a section in which Mickens talked about the dumb things people do that can undermine even the most sophisticated security setup.

Things like: saying they graduated from Central University, even though there is no school by that name in the US, or spelling the name of their profession wrong. 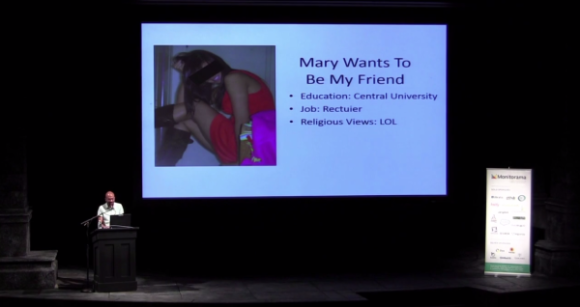 These are all good clues, he said, that the hot babe you just friended on facebook was really this guy: 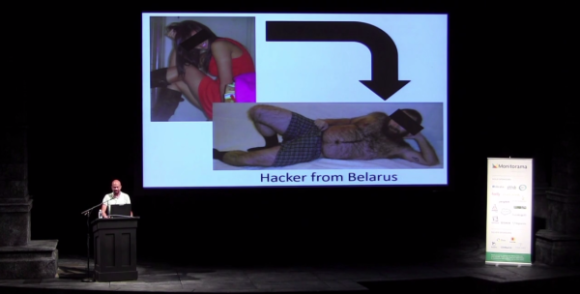 Given that men are regularly duped with simple tricks that play on their horniness and gullibility, Mickens joked, maybe the real goal for people trying to design secure systems should be the elimination of all men. 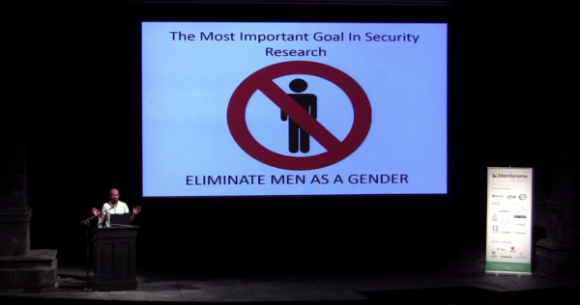 So that’s where the slide comes from.

And by the way, that whole bit of his killed — not as in “killed all men” but as in “got giant laughs from the mostly male audience.” Expecially the part about killing all men.

If you want to see the whole bit, starting with Mary and ending with “eliminate men as a gender,” it starts at around 20:40 in the video.

It’s interesting how “I’ll defend to the death your right to say it” applies to Thunderf00t, but it doesn’t apply to Anita Sarkeesian. Chucklefuck doesn’t spare even a single word defending Sarkeesian, but in fact started out going on about how Thunderf00t is totally justified in calling her names because: Hitman.

So Thunderf00t dedicating his life, for months, to insulting and trying to silence Sarkeesian is speech that people should die to protect, but Sarkeesian’s original videos, which attempt to silence nobody, don’t count as speech that should be protected.

I meant to say, Thunderf00t’s speech is so important and so protected that making him a footnote in a blog post is too much censorship, but hours and hours of video dedicated to how Sarkeesian is a terrible person who should stfu is totes okay.

And I’ll note that David Futrelle’s footnote about Thunderf00t isn’t worth dying to protect either. Really, it’s just Thunderf00t whose speech is worth death to protect. Nobody else!

So Thunderf00t dedicating his life, for months, to insulting and trying to silence Sarkeesian is speech that people should die to protect, but Sarkeesian’s original videos, which attempt to silence nobody, don’t count as speech that should be protected.

But but but… Sarkeesian doesn’t allow every single chucklefuck on the internet to shit all over the comments section of her videos! Clearly that is silencing of the most nefarious kind and can only be responded to by ever-escalating threats! /sarcasm