Watch out, Milo Yiannopoulos, you’ve got competition! #GamerGate has a new journalistic champion — and this one, like Milo, seems to have come straight from central casting, a virtual embodiment of every snooty reactionary preppie stereotype from every bad 80s movie.

A libertarian think tanker and erstwhile journalist with the unlikely name of Mytheos Holt, this new contender has one great advantage over young Milo: as you can see in the photo above, which I have not photoshopped in any way, he appears to be made entirely of wax — which means that unless someone accidentally sets him near a heater he will last forever.

Mytheos’ first intervention in #GamerGate comes in the form of a long opinion piece in the right-wing e-rag Daily Caller that attempts to recast the GamerGater struggle as a glorious resistance campaign to an ongoing #WaronNerds by “Far-Left Feminists And The Media.” Mytheos, who looks so much like an archetypical tormenter-of-nerds, might seem an unlikely GamerGate champion, but he’s a gamer, too, and his piece has been embraced warmly by the GG masses.

Commenters in Kotaku in Action, Reddit’s most influential GamerGate hangout, describe his piece as “excellent,” “insightful,” and “incredibly well researched.”

“Time for #WarOnNerds to start trending,” writes one enthusiastic commenter. “Welcome to the next level, Mytheos,” adds another, “we’re the only people in the history of ever to beat Social Justice, and this train has no brakes.”

The enthusiasm for the article might at first seem a little strange, given that Mytheos starts out by comparing GamerGaters to …  a British teenager who earlier this year stabbed some girls in the face:

On February 11, 2014, the Daily Mail reported on the case of 19-year-old Ryan Walker, a thin, bespectacled “wimp” by reputation who, upon being bullied one too many times by some neighborhood girls, attacked them furiously, stabbing one in the face and bashing the other’s head against the pavement. …

And so it was that half a year before it began, #Gamergate was explained.

But the rest of Mytheos’ post reaffirms most of the GamerGate mythos: that it is a fight against corruption, not a campaign terrorizing outspoken women in gaming, and that it actively roots out the harassers in its midst. Above all, Mytheos argues that GamerGate, however rough it might be around the edges, is a justified rebellion against the Social Justice Warrior oppressors.

Mytheos’ indictment of the (alleged) evil leftist nerd-tormenters is as histrionic, and as utterly divorced from reality, as any GamerGate manifesto pasted into a bad infographic:

Along with their furious denunciations of the gaming press, the movement also appears to be fighting a new culture war — one against a new, radical and dangerously illiberal left which marinates in a hideous quagmire of resentment, smugness, vacuousness and contempt for free discussion. This movement prefers the vile ochlocracy of the Twitter mob … celebrates the Maoist public shaming of doxxing, and seems incapable of distinguishing between a .gif and an argument.

In case you’re wondering, ochlocracy means “government by mob.” It pays to increase your word power!

Make no mistake, when it comes to #Gamergate, both the SJWs and the gaming press are facing a backlash that is not only thoroughly warranted, but of their own making. …

America’s nerds are fighting back against what they rightly see as ages of persecution and dismissal by an extreme left wing fringe that they believe has co-opted the very press they used to trust and used it as a weapon of oppression despite claiming to speak for the oppressed. …

Their case is historically next-to-impossible to dispute.

Well, at least until Mytheos actually tries to make such a case. His alleged proof of the ongoing oppression of nerds by the SJW?

Mytheos leans pretty hard on #4,  devoting more time and energy to railing against the “feminist cruelty” of the Nice Guys of OkCupid blog (and those who were amused by it) than he does to the alleged “journalistic corruption” that is supposedly the real reason for GamerGate.

Indeed, aside from mentioning Biddle’s Tweets and taking a few swipes at Valleywag, the Silicon Valley blog that Biddle used to work at, Mytheos offers no real critique of journalistic corruption at all. NiceGuys of OkCupid, by contrast, gets more than 600 words, as Mytheos stands up (sort of) for the honor of a group he describes as

dumpy, white, awkward looking men whose primary crime in their profiles was expressing either insufficiently feminist viewpoints … or simply of being sad or angry about their lack of romantic options.

Yep. Mytheos does indeed seems to be suggesting that GamerGate is fundamentally driven by the resentment of “dumpy” white dudes who can’t get a date.

In a lot of ways, his argument is a cruder, and crueller, version of an argument I made about Men’s Rights Activists a few weeks back. In my post, I asked if

the rage that drives so many MRAs come from the same dark place in the psyche as the rage that so many romantically and sexually rejected feel towards their exes? …

Think of the fury many divorced MRAs feel towards their exes and women at large. Think of the self-pitying rage of “nice guys” MRAs in their teens and twenties who feel they’ve been unfairly “friendzoned” by stuck-up women. …

The continuing debacle that is GamerGate, which after all was called into existence by one dude’s long diatribe against the alleged evils of his ex-girlfriend, seems to reinforce this point every single day.

It’s just strange to see a supporter of GamerGate making a similar, if more simplistic, case — and being applauded for it by the very guys he describes so patronizingly as angry dateless “losers.”

NOTE: Make your own Mytheos Holt #NotYourShield memes here! And post them in the comments below!

I think they think social justice ideas are some sort of a virus/cultural disease, so in their minds it’s like they’re saying “We beat polio, yay!”.

Except, in their case, it’s more like cheering that they brought polio back as an endemic disease.

“We beat the common cold so that we could replace it with bird flu! Yay?”

It’s high time immune systems pulled themselves up by their bootstraps, stop whining and playing the victim card, and fight off diseases themselves. Vaccines are for manginas, feminazis and liberals!

It’s about ethics in endemic diseases.

At least the Wild Card virus gives you a prize if you beat it.

Wild Card is the only thing by George Rape Rape Martin I’ve ever actually read.

Regarding the abominable Dr. Phibes of the OP, shouldn’t the Vaseline go on the lens and not the subject? That said, it looks more like a slight focusing defect than anything else. Hasn’t he bleated on Twitter about how it’s an old photo? Nice to know he’s paying attention.

Is this challenge still on? 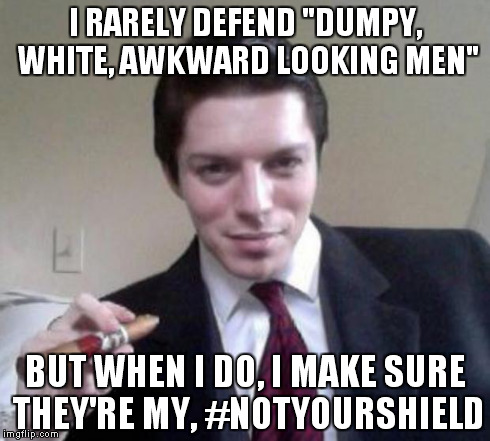 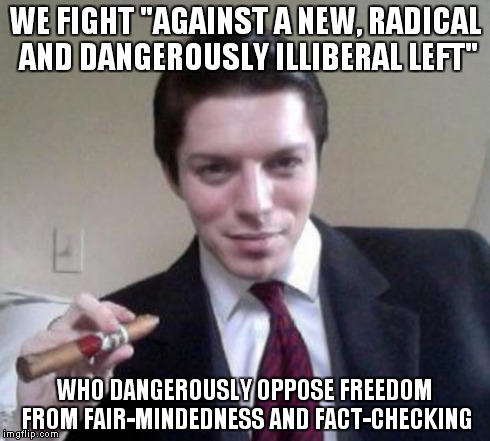 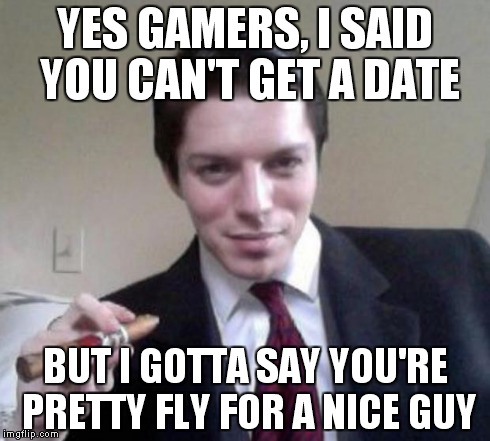 Ignoratianescia – very nice! For some reason, that last one reminded me of Lovecraft’s story “The Festival” and the waxy-looking face. Dreadful to think of what might hide behind that smug phiz – as Gareth Blackstock put it, “that’s not a man – it’s a smirk with legs!”

He kind of looks like a rejected animatronic from Five Nights at Freddy’s.

Robert-I’m moving in a month so just send it to Bunbury, WA. Also Martin edits Wild Cards, most of the stories are written by others, though he does have a lot of say in how the overall plot goes.

You can kind of see his trademarks, so many Ace women with sex powers.

I’m sure many here have already come to this realization on their own but I’ve found that when someone uses a cigar as a prop in a photo it’s generally a fairly reliable sign that they’re an asshole.

This will probably hold true until Wolverine discovers instagram.

Why do all these manly, manly men not know something as simple as how to wear a damn tie? A four in hand knot with a spread collar? Even a lamesauce SJW like myself knows how to fill a collar.

The article has plenty of bad ideas for you to criticize. So there’s no need for you to make rude comments about the writer’s personal appearance or to make fun of him for using vocabulary words you’re not familiar with. That’s kinda awful. If this person really has been bullied, responding in this way is going to hurt him.

(Also, you say that Sam Biddle’s tweets were just a joke. But I’m not so sure, because he deleted them awful quickly. Even if he was joking, that doesn’t justify him. Such a joke would be in very poor taste. There are nerdy people who actually kill themselves because of bullying, so inciting bullying against them “jokingly” is way too similar to making other sorts of “jokes” that end up hurting minorities. Nerds might have it better than women, blacks, or LGBTQ people, but their lives still aren’t a total walk in the park. So tweets encouraging violence towards them cross a line, and that’s true regardless of what Sam’s intentions were.)

Maybe i’m missing something essential? I don’t see anyone making fun of Mytheos appearance. Patrick Bateman was categorically described as incredibly attractive in American Psycho and lasting until the sun burns the earth because you are an animated sentient golem of wax and bluster isn’t really a dig at his appearance as much as his presentation.

I guess it could be insulting and deragatory, though? I read it as hyperbolic jokes, much the same as writing

one against a new, radical and dangerously illiberal left which marinates in a hideous quagmire of resentment, smugness, vacuousness and contempt for free discussion

Isn’t actually meant to bully and shame every person with left-leaning politics as much as set out a conversational backdrop for the ensuing argument.