← I Hate Lucy: This Redditor doesn't know it, but he just came up with a great premise for a Red Pill sitcom
Reactionary racist woman-hating fantasy author Vox Day has some helpful advice for street harassers on how to harass more effectively → 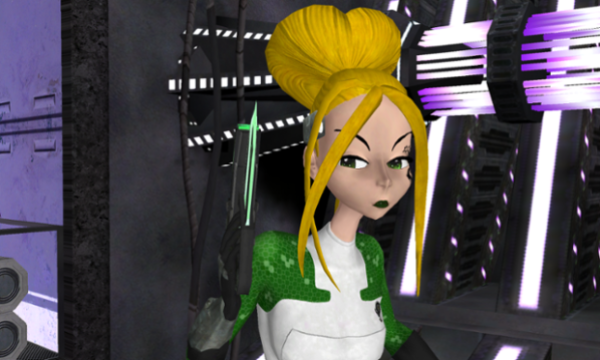 Revolution 60, the game with women in it that Brianna Wu already made, dudes!

When women, in conversations online,  point out the ridiculously tiny percentage of video games that feature women as protagonists, they tend to get flooded with responses from indignant gamebros telling them that if they don’t like the games out there, they should just make their own.

The gamebros mean their comments to be conversation-enders. Just as Vivian James, #GamerGate’s imaginary girlfriend, tells game critics to “shut up and play,” these guys are telling critics of the retrograde gender politics in gaming to “shut up and make games.”

It never occurs to them that some of the women they smugly tell this to … might already be doing this.

One of the more entertaining aspects of following the Twitter account of much-harassed game developer Brianna Wu — known in #GamerGate circles as Literally Who 3 —  is watching clueless gamebros try this “argument” on her.

LOVE IT when men tell me, "Don't like how women are represented? Make your own games!" Lol. http://t.co/LlkDLnmOVs pic.twitter.com/n0BgqwvH2B

The whole thread is here if you’d like to see what an unpleasant fellow this Simon Wood really is. 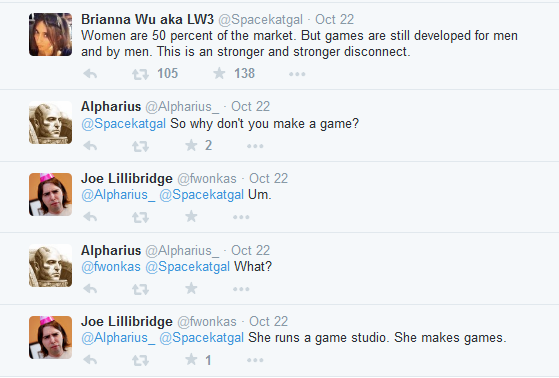 Of course, some of her, er, critics seem to realize that she already makes games. But somehow this doesn’t keep them from yelling at her to make games anyway.

Others demand that she start making GOOD GAMES.

(Huh. Seems like a decent number of people think the game she just releaased is good.)

And this demanding GamerGater wants to know why she doesn’t make MORE games.

This guy apparently thinks that instead of criticizing the game industry, Wu should be personally training a new generation of girls to make games.

@Spacekatgal Just because they are mostly designed by men doesnt women cant enjoy them and if they don't, teach women so they can make games

Posted in: #gamergate, gamebros, harassment, misogyny, oppressed men, patronizing as heck, twitter
← I Hate Lucy: This Redditor doesn't know it, but he just came up with a great premise for a Red Pill sitcom
Reactionary racist woman-hating fantasy author Vox Day has some helpful advice for street harassers on how to harass more effectively →

Donate to the Mammoth!

We Hunted the Mammoth is an ad-free, reader-supported publication written and published by longtime journalist David Futrelle, who has been tracking, dissecting, and mocking the growing misogynistic backlash since 2010, exposing the hateful ideologies of Men’s Rights Activists, incels, alt-rightists and many others.

We depend on support from people like you. Please consider a donation or a monthly pledge by clicking below! there's no need for a PayPal account.

Send comments, questions, and tips for stories to me at dfutrelle@gmail.com, or by clicking here

Keep this blog going by clicking on the link below! You don't even need a PayPal account.